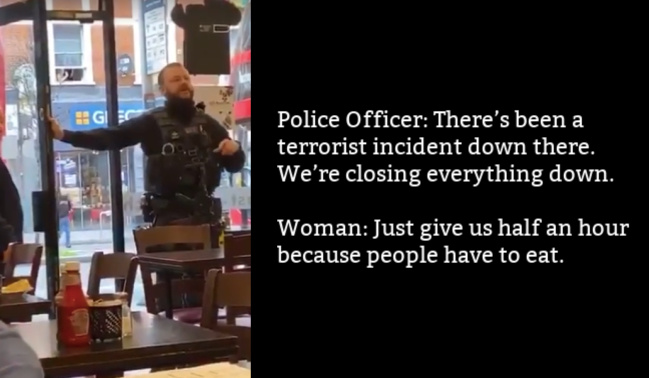 There was a terrorist attack in London on Sunday when a man stabbed two victims and was then shot dead by undercover police officers. I’m not going to get into the details because this blog tends to focus on other horrors such as waters with lemon that customers don’t even drink or servers who get a 10% tip even after the service was absolutely fucking perfect. What I am going to focus on is a video in nearby cafe where someone, presumably a British woman named Karen, had a shocking response to a police officer who came into the restaurant to tell them they needed to evacuate the area.

Police Officer: There’s been a terrorist incident down there. We’re closing everything down.

Woman: Just give us half an hour because people have to eat.

Police Officer: Madam, a terrorist has just been shot dead just down there. Got a possible IED vest on, which is a bomb.

So let me understand this: even though a man has been shot dead, literally down the street from the restaurant and he’s wearing a vest potentially covered in bombs, this woman is still going to ask for thirty minutes so she can finish her damn baked beans and Earl Grey tea? Who does she think she is being so needy, selfish and oblivious to the situation around her, an American? Lady, take your crumpet, wrap it up in a napkin and get the fuck out of there. It’s literally the chance to walk out on a check without paying for it while also possibly saving your life. Take the advice of the nice officer who is holding an automatic rifle and stop being so bloody tiresome. Grab your mate and scurry on outta there. He was nice enough to call you “madam” rather than “slag,” so be thankful for that.

Maybe it’s the cafe owner who was worried about watching her profits all walk out of the door, but I can’t imagine any customer choosing to stay over the word of a police officer. If anything, it would make me think this owner is a little bit too desperate for her own good.

Here I was, thinking that the only people who were that self-involved when it comes to dining out were sitting in Applebee’s in the United States, but this video proves that every country has their own version of this type of person. How do you say “Karen” in British?