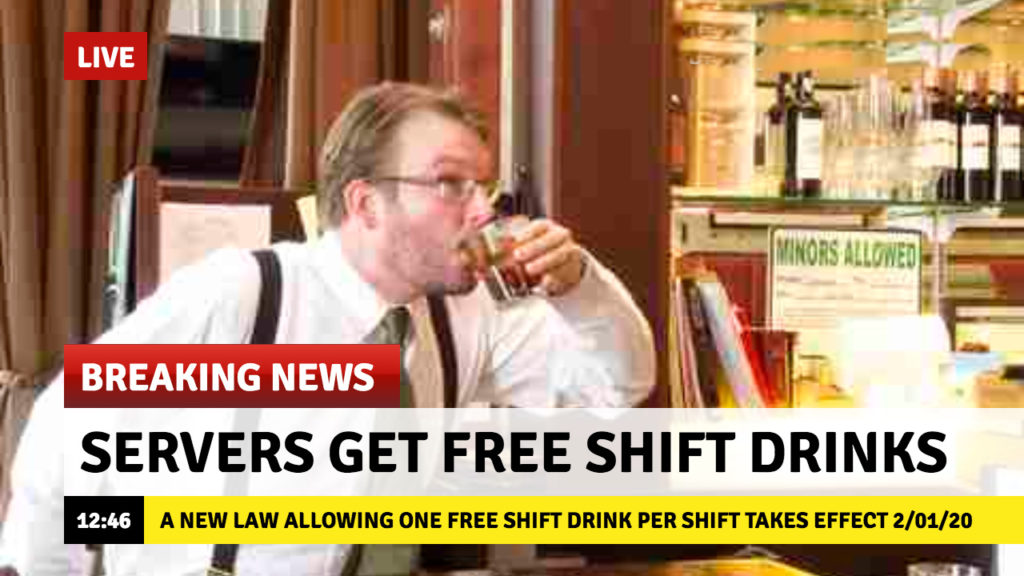 A new law is scheduled to go into effect on February 1, 2020 that will directly affect servers around the country. The legislative proposal, SD-requirement 1, was nestled within a much more complicated bill covering farm subsidies and soybean transfers within North America, specifically between Canada and Mexico. The law states:

All servers who are making at least the federal minimum wage for tipped employees of $2.13 an hour, will hereby also be entitled to one complimentary shift drink before or after their shift at any restaurant that has at least eight (8) employees. Should the employee choose to not take the shift drink, they can request credit onto their paycheck not to exceed $5.00 dollars per shift. The shift drink can be any beverage, but congress highly recommends that it be one of an alcoholic nature not to exceed either two ounces of alcohol per drink or a single glass of beer or wine. Should the employee be working a double, the law allows for the two shift drinks to be combined into one at the subsequent end of the second shift.

Servers across the country are celebrating the new law. Says Alfred K. Hallick, a server at Doug’s Donuts Diner in Beersheba Springs, TN, “I’m just grateful that the government finally did something that benefits me. All these tax cuts for the rich are great and everything but if I can get a free Coors Light after every shift, that’ll save me about $24 a week. Good bless the USA!”

Understandably, not everyone is happy about the sweeping changes, restaurant owners in particularly. Melba Totes, owner of a franchised Applebee’s in Spokane, WA says, “I have 19 servers in my store, so now I have to give away free cocktails to them? I’ll just give them those crappy ass Vodka Rum Frostbites that we’re selling for a dollar right now. They only cost about fifteen cents to make, so I guess I can afford that.” When reminded that the server gets to choose what drink they want or take a $5.00 credit, Totes’ head exploded, making a huge mess in section three. The busser tasked to clean up the mess, Nyada Faire, grumbled, “Of course the bussers don’t get a shift drink because I guess we just don’t matter.”

The law goes into effect on the first of next month so it is imperative that all restaurant owners are made aware of this change in policy. For a printout with the complete explanation of the new law as well as suggestions of what drinks to ask for in order to take the most advantage of the situation, please click here.