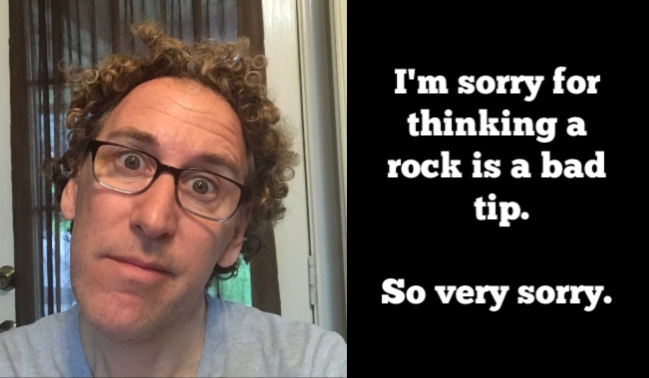 I guess I’m an ungrateful, repulsive asshole who wouldn’t know gratitude if it came up and tickled my taint. A couple of days ago, I posted a photo on ye olde Facebook page that brought people up in arms. It was a photo of a tip someone named Kim left her server at Golden Corral. The bill was clearly visible as $35 and the tip consisted of what appeared to be two dollars and a rock. The rock was hand-painted, presumably by Kim. I thought it looked like an arts and craft project from a 10-year old’s art class at summer camp that some unlucky parent would obligingly hold onto for the rest of their days, ending up dusty on a shelf next to a wonky-ass ceramic ashtray and a picture frame made out of popsicle sticks. I mentioned that no server wants a freaking rock as a tip, but apparently I was wrong.

Comment after comment poured in from servers who claimed it was “adorable” and “touching” and “sweet.” Someone even tracked down the original photo’s Facebook post and found that the server who received the rock as part of her tip, Linda, was also appreciative of the rock. Apparently, it made her day. 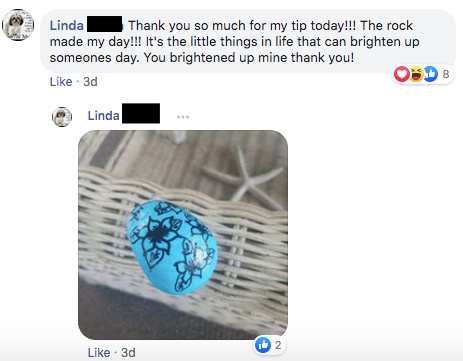 Servers shared their stories of when customers had left them sweet gifts and surprisingly, plenty of other waiters and waitresses have also received rocks as tips. I was shook.

I am sorry. I’m sorry for thinking that a rock is a bad tip. I would like to go on record and say that from this day forward, I think every customer should be leaving rocks as tips. The bigger the better. Did your waiter manage to get you in and out of the restaurant in record time so you could get to a movie? Give him a painted rock! Did a waitress refill your water glass a total of seven times, never once letting it fall one inch below the rim? Give her two painted rocks! Did a server give your 12-top perfect service and separated all of the checks and then sing happy birthday to you? Roll in a fucking painted boulder for that server!

And servers, when it comes time to pay your rent, you load up all those rocks in a wheelbarrow and then you dump those rocks at the feet of your landlord and make sure they see how pretty they are. Surely, they will jump at the chance to own a ton of stones because who doesn’t want more rocks in their life? Put those rocks in safe deposit boxes and save them for your children! Write them into your wills!

After so much pushback about the painted rock, I thought maybe I simply didn’t see it for its full potential so I asked an art expert for his opinion. Dr. Blarney S. Tone is a professor of art history and one of the country’s leading geologists. She looked at the rock and gave me this appraisal:

The delicate brush strokes are similar to those seen in the early work of Leonardo DaVinci. It’s also abundantly clear that Kim has studied the works of Jackson Pollock and Keith Haring. As for the stone itself, it appears to be of the Paleozoic era. I am particularly impressed with the artists’s use of the Sharpie. Very impressive. Should this piece go onto auction in the international art community, I would expect to see bids upward of $100K. The server who received this exquisite work of art should be very, very grateful.

So there you have it. I was being a jerk thinking that no server wants a rock as a tip. To Kim, and every other server who appreciates the gift of stone, I apologize. I may be a bitch, but I can certainly see when I have misspoken. It takes a big man to admit when he was wrong and it takes an even bigger man to carry a pile of rocks to the grocery store to buy a loaf of bread.

9 thoughts on “Servers DO Want Rocks For Tips”