Last week, I wrote a blog post about the above image. It went fairly viral and after a few days, I was contacted by one of the women in the photo. She was not happy with me. The message basically said “our professor told us to do it” and “the waitress knew what was happening” and “we didn’t give permission to have our photo taken” and “people are being mean to us and calling us names” and “we demand you take down the post” and “blah blah blah.” Therefore, I am reposting this blog with a few revisions. Below, you will find the the original text with a few redactions (struck out) and additions (in red.)

To the two women in the photo: I’m sorry. There should have been more research before I posted the photo. I’m sorry some of the readers recognized you since you’re both minor celebrities at your school and then called you names. I didn’t mean to spread misinformation, but then again this blog isn’t CNN or NPR. It’s a blog written by a bitchy waiter. But, I’m sorry.

For most servers, it’s not difficult to look deep inside our bodies to find a pool of revulsion and disgust for our customers. Even the most friendly of servers have that well of dislike, it’s just easier for some of us to find it. For me, it’s like a year round swimming pool full of too much chlorine and loathing with no shallow end and a broken diving board. For others it’s more like a secret swimmin’ hole of slight empathy that one has to know where to look to find it. There are a lot of ways to make us dislike a customer, but the surest and most certain way I have ever seen to guarantee that response is to do what these two women did when they went out to eat at a restaurant that I hope no one will recognize. They placed a sign on the table that said “Your Tip So Far.” 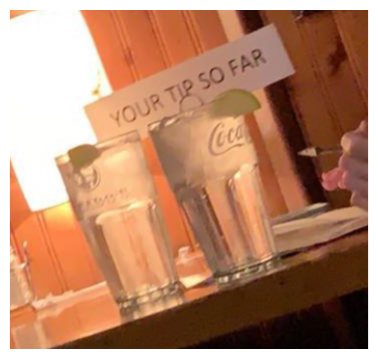 YOUR TIP SO FAR

I have taken the liberty of placing huge sad face emojis over the faces of these two women in order to protect their privacy. By doing so, I hope no one ever recognizes these two women and then calls them names on the Internet.

After this image was sent to me, I then heard that the sign was part of an experiment for a physiology class at a university I do not want to name so these women CANNOT be identified. Physiology is defined as the branch of biology that deals with the normal functions of living organisms and their parts. It sounds more like a psychology (the science that deals with mental processes and behavior) experiment, but I was told physiology, so we’ll go with that. Now, I’m not a fancy scientist or anything, but this experiment is obviously about learning how a server’s brain explodes at the sight of two college students who are messing with that server’s income. Or maybe it’s an experiment to see what one needs to do in order to have your food at a restaurant take longer than it should and how to make sure your water glass is never, ever filled. Whether it’s an experiment in physiology or psychology, what the actual fuck?

If this “Your Tip So far” sign was a noble experiment, it seems like they are using the server as a subject without the server’s consent. Again, I’m no expert, but that seems morally irresponsible. I do hope this photo gets shared plenty of times so we can conduct our own little experiment: by sharing the photo hundreds or even thousand of times, we can learn whether or not a professor at an unnamed university will own up to their mistake and admit this was a bad idea. If this behavior was not because of a professor and was, in fact, two young women simply being pains in the asses, then we can also see how long it takes for them to go into a restaurant again and actually treat their server with respect and dignity. But we shouldn’t have to worry about that because no one will ever know who these two women are.