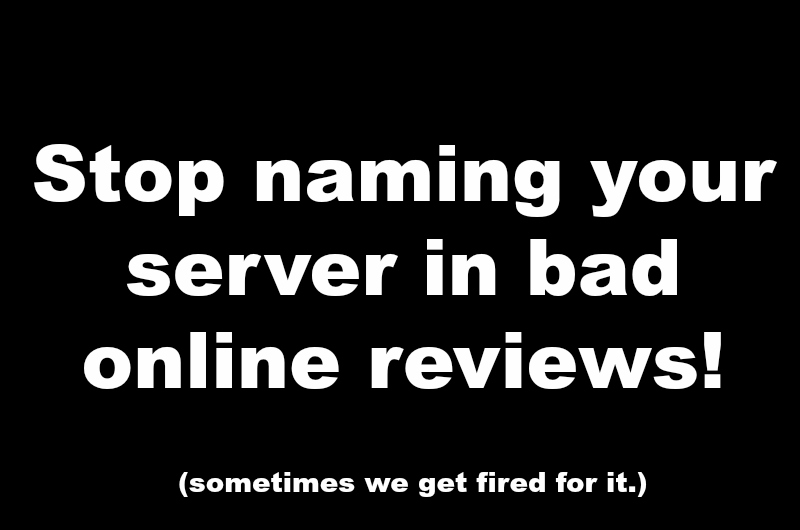 Anyone who has read this blog for more than a few days knows how I feel about online reviews of restaurants. While I can accept that they do have some use, too many diners use the threat of online reviews to try to blackmail the restaurant into giving them more than they deserve. And don’t even get me started about someone who leaves a one-star review for something that has absolutely nothing to do with the food or service. (“I have never eaten here, but every time I drive by, the parking lot is too crowded. One star!” or “I was sitting on the patio and a fly landed in my lemonade. One star!”) But there is another thing about online reviews that really chaps my ass and that’s when a customer mentions a server by name.

Look, if you are unhappy with the way your dining experience went down, by all means, fire up the fucking Internet, create a Yelp account and go to town. Try to make sure that your version of the story is accurate though because whiny ass customers are going to exaggerate in order to prove their point. (We know you didn’t really wait an hour for your food because your check has the time printed on it, assholes.) So many restaurant owners and managers look at Yelp and Facebook reviews as the most important thing ever put on the world wide web. Bitches, please. It’s not like Moses trekked down from Mount Sinai carrying a Yelp a review carved into stone. These reviews need to be taken with a grain of salt, because they can be deadly for servers who are are specifically mentioned. Time and time again, I have heard from servers who have either been suspended or fired because of a negative online review. The worst part is that some managers don’t even bother to hear the server’s side of the story. Instead, they take the review as the gospel truth and immediately get rid of the person mentioned. But what about when the server is unfairly named? It isn’t that difficult to believe that a trite, vindictive customer would be willing to throw a server under the bus just because that server refused to serve their drunk ass another cocktail or because the server wouldn’t let them order off the kids menu. The waiter is just trying to do his job but then a review shows up that says he had a nasty attitude and was rude and now the server is out of work because his boss chooses to believe an asshole customer over their own trusted employee.

Stop using names in reviews. It doesn’t help anyone and all it does is make trouble for the person mentioned. Even if your server did treat you poorly, wouldn’t it be better to grow a pair of balls and speak to management directly rather than letting cowardice rule your life and hide behind a computer screen? Any person who mentions an employee by name in an online review is a straight up asshole. There’s no two ways about it. Karen, you can still get your free fucking Applebee’s gift card without saying that Scott had an attitude when you told him you were gluten-free. Brad, you can still get that semi-chubby by seeing your name on a Yelp review without saying that your waitress Anna didn’t smile enough. Calm the fuck down and make your reviews matter. Calling out people by their name only makes you look like a vapid asshole looking to push buttons and get someone in trouble.

I’m sure that after I post this blog, I will hear from several more people who lost their jobs because of someone calling them out on Yelp. It’s not fair. As if Yelp doesn’t already suck enough dicks, it also has the power to unemploy hardworking servers who happen to work at restaurants with a zero tolerance for bad Yelp reviews. The next time you want to write a bad review about your dining experience, please take a moment to think about the consequences of what you write. How would you feel if someone posted a review about how bad you were at your job as a whore and then your pimp read the review and you had to go find another corner to work? You wouldn’t like that, would you? Be careful what you write. Someone’s job may be on the line.

10 thoughts on “We Should Not Be Fired For This”