Home
/
Uncategorized
/
Man Has Question for TGI Fridays. I Answer It. 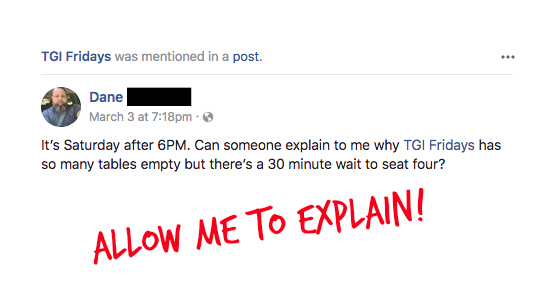 Because I am a giver and a true humanitarian, I take every possible opportunity to share my knowledge with those who are not as well-versed in the ways of the restaurant world. That’s why, when I saw this query from Dane on the TGI Fridays Facebook page, I knew it was my chance to educate him. Dane went to TGI Fridays on a Saturday night after 6PM and was dismayed to learn that he would have to wait 30 minutes for a table despite the fact that there were several empty tables in the restaurant. I am going to skip right over whatever life choices had led Dane and his friends to be eating at TGI Fridays and instead delve right into the explanation of his question.

Here’s the deal, Dane. A restaurant can only seat customers based on their available staff, not the available tables. There could be 150 empty tables in your local TGI Fridays but only one server, so that would mean that they are only going to seat the number of customers that the tired, overworked, stressed-as-fuck server can handle. Imagine Dane, if you will, when you go to the grocery store and see several checkout lanes but only a few cashiers. Do you go to one of the lanes that is not staffed? Of course not, you wait in line for one of the lanes that actually has someone who will be able to help you. Same thing in a restaurant.

Still don’t get it? Okay, here’s another example. When you go to the bank, you get in line and wait for a teller to call you over, right? Well, sometimes there are only four tellers even though there may be seven or eight windows. Only an idiot would wait in line and then proceed to one of the windows that doesn’t have someone there to help you. Now, if the restaurant seated you at one of those many empty tables even though there was no server to take your order, wouldn’t that be the same thing as going to an empty teller window at the bank and expecting to make a deposit?

I know what your next question is going to be, Dane, so let me answer it for you. You want to know why the restaurant doesn’t have enough servers to take care of all the tables, right? Well, there could be several reasons for that, including but not limited to, a shortage of staff, call outs or maybe the manager just doesn’t give a rat’s ass if customers have to wait thirty minutes before they get a chance to shove a Bourbon Barrel Chicken down their eating hole. My guess is that a couple of servers called out sick that night. There is a flu epidemic going around and you certainly don’t want your server to have a 104° fever and snot dripping from their nose into your bowl of Spinach & Queso Dip. Or maybe the servers didn’t call in sick and they called in “I just can’t anymore.” Both options are quite feasible.

Dane, I hope this clears things up for you. The next time you go to a restaurant and see empty tables, now you will understand why you won’t necessarily be whisked over to one immediately. If this still doesn’t make sense for you, I can only assume that you are that person who goes to the grocery store and stands at a checkout lane that doesn’t have the light on and you wonder why it’s taking so long for you to pay for your TGI Fridays Mozzarella Sticks, now available at your local grocery store! 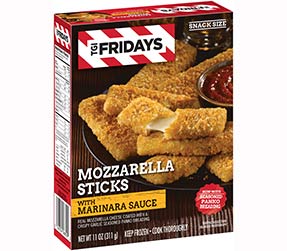 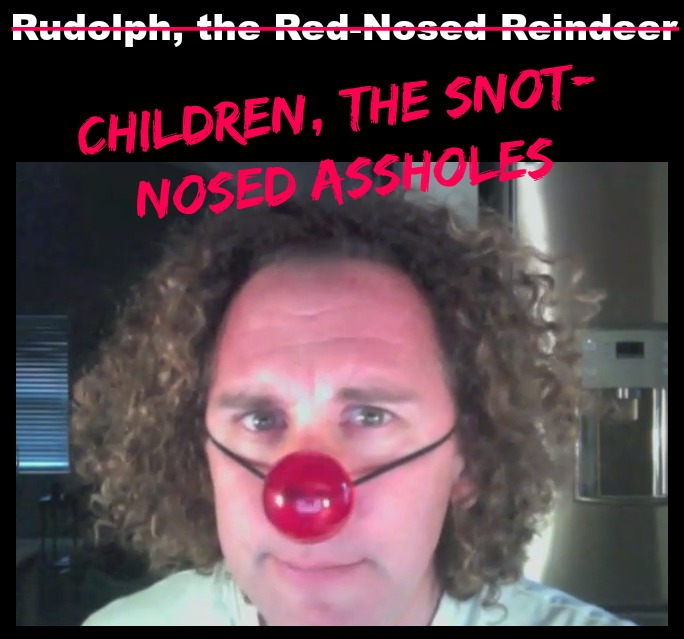