Home
/
Uncategorized
/
Why You Should Buy My Book

Dear BW.. You are hilarious and speak for thousands…thanks, but, now are a self-propograted ass, just trying to cash in. Stand up and a book deal, and pandering for sales? Not my co worker anymore.

The first thing I thought was, “what awful grammar and what the fuck does ‘self-propograted’ mean?” The second thing that happened was my feelings were hurt that someone saw me as that person who was “selling out” by writing a book, but then I thought, “Wait one fucking minute.” I have been wanting to write a book ever since I was a kid. I used to write stories on little slips of paper and then tape them altogether and present them to my parents as my latest book. When I started this blog in December of 2008, there was never any intention for it to grow into what it has become today. It was just a simple project that allowed me to vent my frustrations while doing one of my favorite things: writing. Fast forward eight years and the Facebook page has over 330,000 people on it and the blog gets thousands of hits each day.

Three years ago, I bought a book called The Idiot’s Guide to Getting Published because I wanted to see if I could figure out how to write a book. That’s right, three years ago. I read that book cover to cover, taking every word of advice it had to give me. I wrote a 25-page proposal and sent it to anyone who would read it. After over a year, I found an agent who liked the idea enough to try to sell it. He spent six months sending it to publishers and then one day, while I was at the restaurant, I got a phone call. (My phone was in my apron when it was supposed to be downstairs in my locker.) My agent found a publisher who liked the proposal and wanted to turn it into a book! That was on September 25, 2014. Eighteen months ago. Finally, the book is coming out. For the last year and a half, I have worked on the book, all the while working two or three jobs, running the Facebook page, writing for other websites and writing for my blog. It has not been easy, but the thing is, I love it. I never dreamed that when I started this blog I might be creating a whole new chapter of my life. (Nevermind the irony of starting a blog about the annoyances of waiting tables and now I have to keep waiting tables if I want this new career to continue.)

Now, with the book only weeks away from its release date, am I going to ask people to buy it? Damn right I am. Sorry, Bridgid, but I am. I don’t see it as “trying to cash in.” I see it as an opportunity that the universe provided to me to do something that I love and maybe, just maybe, get paid for it. Isn’t that what everyone dreams of doing? Discovering that one thing that gives them joy and then figuring out a way to make it what you do for a living? I have worked my ass off for eight years being the Bitchy Waiter. No, literally, I no longer have an ass. This is what I do and I am proud of this book. It’s easy to say “I want to write a book” but following through on it is the hard part. I’m proud of this accomplishment and I hope people will buy it. But if they don’t I’m okay with it. Worst case scenario is that I will be able to say, “Oh, yeah in 2016 I had a book published.” That’s still pretty good to me.

You can click here to buy it and I hope you will because this book means the world to me. It’s not even that expensive. In fact it’s less than a martini here in New York City. Thanks, everyone. 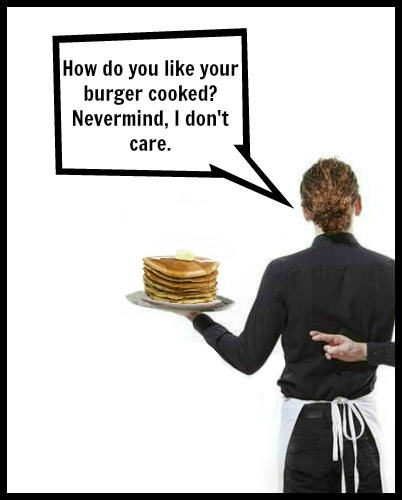