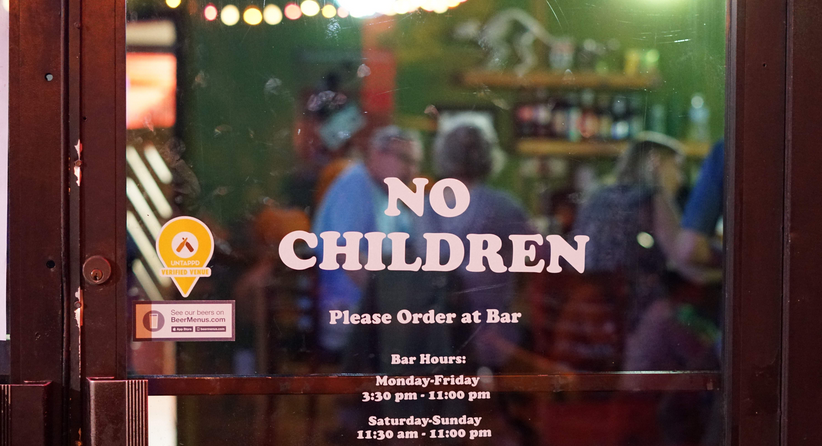 A pizza restaurant in Tampa, Florida better batten down the hatches because they are about to be attacked by the stroller brigade. Last week the owner of Hampton Station decided that children were no longer allowed at the establishment. The man who came to that decision is named Troy Taylor and am about to go carve a statue of him made out of string cheese as soon as I find out what he looks like. He says it was not an easy decision to make, but it needed to happen because of “a lot of people who couldn’t keep their kids under control.”

Okay, his statue just got a lot bigger.

Of course there people on the restaurant’s Facebook page who are leaving 1-star reviews along with their own 1-star comments. Seriously, it’s like they forget that businesses are privately owned and business owners can decide who they would like to cater to. This pizza restaurant happens to want to cater to adults, but a few of the comments are as golden as a pizza crust:

“I just heard about the new no kids rule. As a parent of a 12 and 13 year old, I see this move as discriminatory, especially to lower income families. Not every family can afford a both sitter and a night out,” says Peggy George who doesn’t understand how discrimination works.

“There are better places to get pizza and beer. Hampton is Not Family Friendly!!” says Jim O’Shea who is trying to make up for Tim’s lack of capitalization while confirming exactly what the restaurant wants people to know.

People need to get the fuck over it. There are plenty of places that kids aren’t allowed and this is one more of them. It’s not like Hampton Station is the only place in Tampa to get pizza. I did a Google search and there are literally dozens and dozens of other pizza restaurants there, so these people can pack up the kids and go to one of them. There is even a Chuck E. Cheese’s at 4308 Dale Marby Highway which is a sixteen minute drive away. You can click that link and go the fuck there.

If you have a moment and feel like making up for some of those shit 1-star reviews, make your way over to Hampton Station’s Facebook page and leave one of your own. If other people are going to leave bad reviews even though they have never eaten there, we should be able to leave good ones. There are plenty of people, myself included, who would love to go to a restaurant and know that without a doubt they will not be disturbed by a screaming child with an inattentive parent. Hampton Station has the right to do this and I think they should be commended for it.

20 thoughts on “Pizza Restaurant Bans Kids and Parents Freak Out”