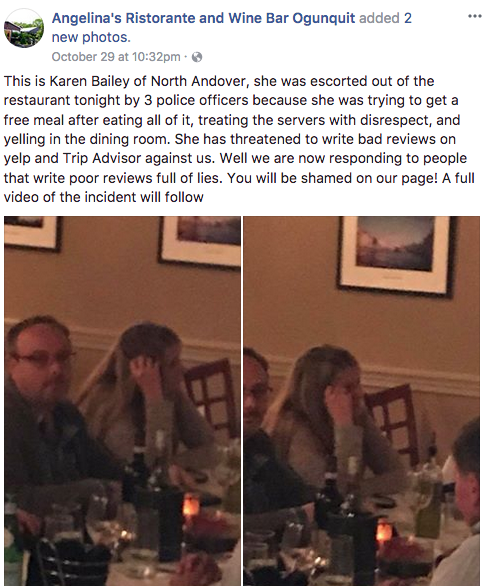 All too often, we hear about a restaurant manager or owner who is more than ready to throw a server under the bus when a customer complains about something. How many times have we as servers tried to reinforce a restaurant policy only to have the customer demand to speak to a manager and then the manager caves in and lets the customer get away with exactly what we were trying to prevent? Well, such is not the case at Angelina’s Ristorante and Wine Bar in Ogunquit, Maine.

On October 29, a customer named Karen Bailey tried to finagle a free meal out of the restaurant. Although the details aren’t clear as to how she was doing it, according to Angelina’s Facebook post, she ate the meal and then made a scene, all the while treating the servers with disrespect. That’s when Dave appeared and took charge of the situation. He stood up for his server and called the cops who escorted Karen’s ass right out of the restaurant. Karen threatened to leave bad reviews on Yelp and Trip Advisor because of course she did. That’s Karen’s way. Apparently, Dave’s way is to take care of his employees and then shame the people who treat his staff like shit.

All bow down to Dave.

Others corroborated the story.

We were there during the incident. The first thing that came to my mind was how impressive it was the way David had his server’s back and wasn’t taking this woman’s crap. He also made every attempt to move her from the dining room while she was being abusive so that she couldn’t disturb his other customers. It’s not that way everywhere and it’s so great to see a boss willing to go to the mat for his/her employees.

While we were enjoying our dessert, there was an altercation between a customer and the staff. She was being extremely rude and disruptive, and extremely disrespectful to the staff. The staff were doing everything they could to try to appease her (while still being incredibly attentive to the rest of the patronage). It became clear that she was trying to get a free meal, and she was asked to leave by the owner, David. She refused and the police were called. It was nice to see that David had his employee’s back in this situation and didn’t put up with trying to be swindled.

Yes, Dave. YES! On behalf of every server who has a boss who doesn’t stand up for us in these kinds of situations, thank you.

Angelina’s Facebook page also says that a full video of the incident will soon follow and I am anxiously awaiting it. I have the popcorn popped, Dave. Bring it!