Anyone who works in a chain restaurant has had to face the challenge of “up-selling.” It’s a necessary evil in the world of corporate dining and most servers are used to it. As a customer, I hate it because if I want bottled water, I’ll ask for it. And just because my server suggests a Blue Ribbon Brownie isn’t going to make me want to eat one. However, if we choose to work in certain restaurants, that is the price we pay. It isn’t uncommon for managers to run incentive contests in an effort to boost sales. In fact, I appreciate those contests because if it means I am going to get to leave work without doing sidework, I will sell the hell out of some cheeseburger egg rolls.

What I don’t appreciate is this sign that pretty much threatens a server’s livelihood if they don’t sell certain items. 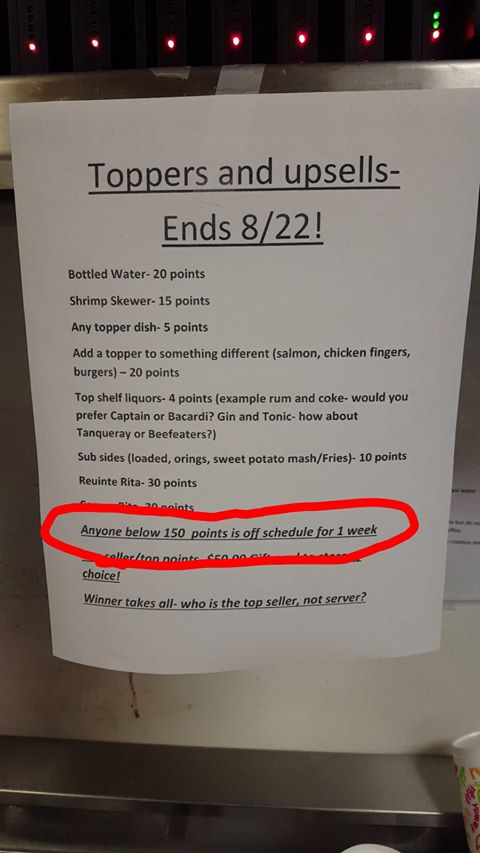 I won’t say the name of the restaurant because I don’t want to trash this place anymore than I already have in the past, but you can probably deduce which one it is by some simple sleuthing. It seems that management is perfectly alright with taking a server off the schedule for a whole week if they don’t upsell and collect enough points. Anyone who doesn’t hit 150 points doesn’t get to make any money for seven days, but the person who gets the most points gets a $50 gift certificate. (At least I think that’s what it says. Part of the flyer is obscured.)

That’s some bullshit right there.

First off, only one person gets rewarded but an unlimited number of people can be punished? How is that okay? What if ten servers don’t collect enough points that week and are off the schedule? There won’t be enough servers to staff the floor and the remaining servers are going to be forced to pick up shifts and work doubles. Maybe those people, after busting their asses for seven days to add toppers to some fucking chicken fingers, want a day off. And let’s assume that someone is working six shifts a week and averaging $75 per shift. If they get removed from the schedule, they are out $450. However, the top seller is only going to be rewarded with fifty bucks? That server should be rewarded with $450! That’s a huge discrepancy.

Secondly, no server should lose $450 just because they couldn’t persuade ten customers to order a shrimp skewer. Maybe nobody wanted a fucking shrimp skewer. Maybe the server said to every person who sat in their section, “Can I offer you the Grilled Shrimp Skewer Salad today?” and every single customer replied with, “No, that salad tastes like ass.” Why should the server be taken off the schedule because that server’s customers wanted to make up their own minds as to what they wanted to eat?

Thirdly, that last line of the flyer really rubs me the wrong way: “Winner takes all- who is the top seller, not server?” Is this what kind of environment the manager wants to create for the guests who dine in their restaurant? Do they really want their customers to constantly be on the defensive with their server because of a constant need to push certain food items on them? I would expect that a good manager would want a staff who provides great service to customers and not punish a server who, although great, didn’t sell enough Reuinte Ritas, whatever the fuck those are.

Listen, Corporate Restaurant That Shall Not Be Named. It’s totally fine to reward your staff for doing a great job and selling bottled waters in an effort to increase check averages, but to threaten to take someone off the schedule for a week for not doing so is downright shitty of you. Again, I don’t want to say the name of the restaurant, but it’s just not cool. Show some respect to your staff and maybe they will show some to you in return. By forcing them to sell things that maybe some customers simply don’t want is only going to make the servers resent working for a company where it’s clear that money is more important than the employees.

Again, I won’t say the name of the restaurant.

Not gonna say it.

Okay, click here if you want to know who it is.

29 thoughts on “Corporate Restaurant Threatens Staff For Not Upselling”