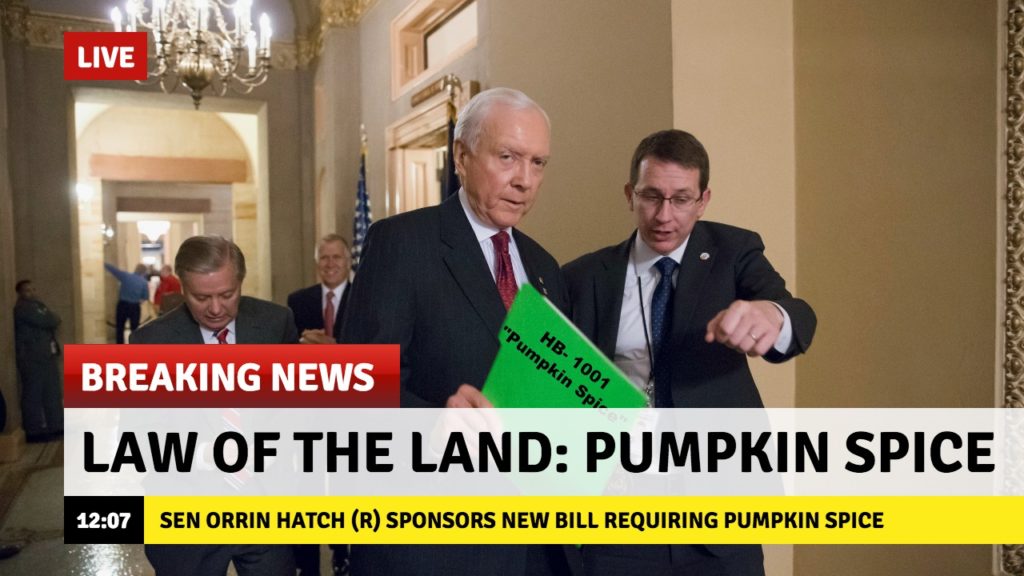 With autumn officially several days old, there is a new law that goes into effect on October 1, that many restaurants do not know about it and it could end up costing them money. Earlier this year, congress passed a new measure: House Bill 1001- Autumnal Gourd Spices:

A BILL to be entitled an Act to amend Part 74 of Article 2 of Chapter 17 of Title 5 of the Official Code of the United States of America Annotated, relating to autumnal gourds, most common of which to be pumpkin, and the spices that shall accompany such gourds. Effective 10/01/17, it will be required that every restaurant that serves food from a full kitchen has at least 8.8% of the menu reflecting “pumpkin spice” for the duration of the months of October and November. Failure to do so could result in fines with a maximum of $1500. Should a restaurant choose to be exempt from HB 1001, they will be required to file exemption form HB-1001/1.8 and submit said form by 9/15/17; to repeal conflicting laws; and for other purposes.

Although the bill passed with ease, many restaurant operators are not happy with the new law, especially small business owners. Jack Osgood Lanterne, owner of Jack of Hearts Diner in Price, Utah is none too pleased with his senator. “I am the owner and cook at my place. My menu is small and now I have to come up with a way to make 10% of the menu with pumpkin spice? It’s not fair. I don’t even like pumpkin spice. And then I have to print new menus for October and November too? It’s an added expense and I don’t see how the government can make me do that. I might just ignore the law and take my chances with a fine.”

However, plenty of consumers are thrilled about the news. Price, Utah resident Sandy Bottom says, “I can’t wait to go a restaurant in October and know that I will have at least a few pumpkin spice choices. I honestly wish the law went further and required it year round, but I’ll take what I can get. I ate a pumpkin spiced bologna sandwich last week and it blew my mind and I’m wearing pumpkin spice perfume right now so I love the new law. God bless, Orrin Hatch.”

Again, the new law goes into effect on Sunday, October 1, 2017. Any restaurant that does not have at least 8.8% of their menu with pumpkin spice and failed to submit an exemption form, must be prepared to pay the $1500 fine. One government official who agreed to speak under the condition of anonymity admitted that the likelihood of any restaurant being fined is very slim. “Honestly, we don’t have the resources to send investigators to every restaurant in the country to check on pumpkin spice menus. If a restaurant chooses to ignore the law, no one will probably know.”

That being said, the government has set up a web page to report any restaurant that is failing to comply with the law. Customers are encouraged to submit violations by clicking here.

To read the whole measure in its entirety, click here.