Home
/
Uncategorized
/
Someone at TGI Fridays Screwed Up 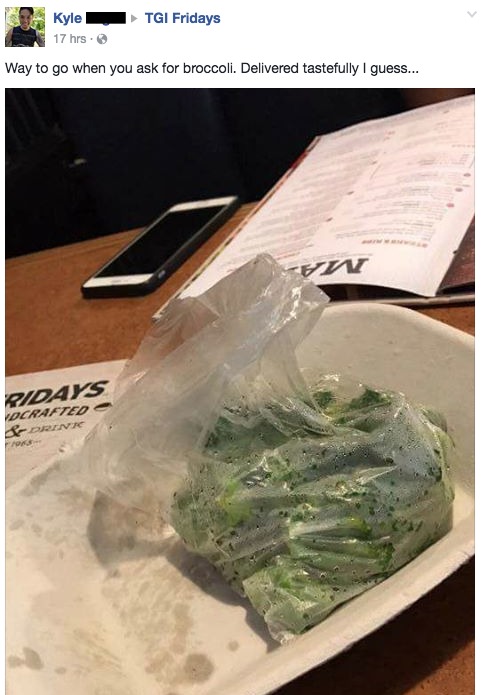 When one goes to TGI Fridays, they have certain expectations: a fun lively atmosphere, a bar surrounded with TV’s so you can watch your favorite sports team, and farm to table fresh food! Well, maybe not that last part. I mean, Loaded Potato Skins doesn’t exactly imply that it was locally sourced. When you go to Fridays, you pretty much know what you are going to get, but I don’t think anyone expects their broccoli to be served in the plastic bag that it was microwaved in

Sadly, that’s what happened to Facebook user Kyle this week and, lucky for us, he posted a photo of it on the the TGI Fridays Facebook page. At first, I thought that maybe it was a delivery which would maybe lessen the severity of the mistake, but the picture clearly shows a couple of menus meaning it happened in the restaurant. How many people had to totally not give a shit in order for this to happen?

First off, the line cook whose job is to “steam” the broccoli did what he probably does hundreds of times per week, which is to pop a serving of veg into the microwave and hit a button. But then did the line cook forget to take it out of the bag? Or was it someone else’s job to dump the broccoli onto a plate?

Secondly, I’m sure there was an expo person who was monitoring the line and making sure tickets were being cooked and sent out. I’ve worked at some corporate restaurants and there is always an expo person. Did that person see a big steaming bag of broccoli sitting on the line and think “meh, whatever” and call for a food runner?

Thirdly, the food runner or server picked up that plastic bag and then carried it to the table to serve to Kyle. You would think they would question why that broccoli was in a bag. Maybe the customer wanted it to go or maybe there was some other reason that someone decided to leave the broccoli in a bag. But, no. That person also shrugged their shoulders and served the food with a side of who gives a fuck.

This leaves us where we are now: Kyle posting a photo of it on Facebook letting the world see how truly un-farm to table the broccoli is at TGI Fridays. Of course the TGI Fridays team replied asking for more details about the situation which pretty much means that Kyle has a gift card on the way.

To the folks who work at that particular TGI Fridays I say this: try harder. Do better. You are not required to care about your job, but you are expected to at least look like you care. Serving a customer the vegetables in the very same bag that it was microwaved in is a pretty good indication that you aren’t trying. At all. Like, seriously, did you even look at what was on the serving tray? However, I must thank you for your carelessness because when I woke up today I didn’t know what I was going to blog about but then this gift of Broccoli in a Bag showed up at my doorstep. Good job.

EDIT: So, the picture did not come from Kyle and it was originally shared in a closed Facebook group. Kyle all be trying to steal focus and shit. Ah, well. Nobody ever said I was a crackerjack reporter… Here is what the original poster had to say about the experience:

Hey guys! I actually posted this in a private server group! It is soooo not fake! I’ve been a server/bartender for 3 years. I’ve expo’d and cooked too. I dined at a typical Fridays around 3pm. When I got there there were NO tables in the restaurant, one server one bartender. It was just my boyfriend and I. I ordered an order of ribs sub broccoli and my boyfriend ordered a pasta. My ribs came out no broccoli, not my bf’s food. He told us my bf’s food is coming up and I remind my server we didn’t have silverware and I’m missing my broccoli. He comes back and drops the broccoli off like this and runs off to his other tables. (Two more had just walked in) still no silverware still no pasta. I can’t stop laughing at my bagged broccoli. Long story short, manager comes by and doesn’t say anything about the broccoli but has a twisted look on his face

? I knew what was going on bc I’ve been through it. I didn’t complain. Just ate my broccoli and ribs, boyfriend exchanged his pasta for something else. We paid, tipped and left 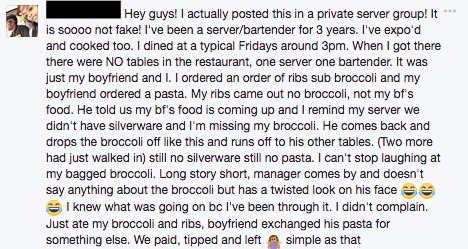