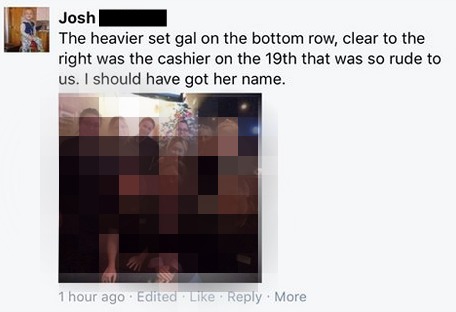 Wait, what? Did a fully grown adult man just call a high school girl fat in a Facebook review for a sushi restaurant? Well, sorta…

Josh went to Wasabi Bistro Asian Cuisine a couple of times and was disappointed with both experiences. The first time he went, his waitress was unsure if he would be allowed to use his Groupon (because of course he had a Groupon…) at lunch since there were no specific details about lunch versus dinner. The waitress was unsure and although she should have checked, she didn’t. It turns out he was not allowed to use it and he was understandably upset that his waitress didn’t find out the answer to his question before it was too late. A manager got involved and she “chewed out” the waitress. This seemed to bring some glee to Josh who is happy to mention it in his review. The second time he visited Wasabi Bistro was when he went through the drive through. He claims they didn’t give him his spider roll and there wasn’t enough sushi, so he went inside to speak with the cashier who immediately gave him “high school girl attitude,” like that’s bad thing. I’ve had a high school girl attitude since the second semester of my sophomore year in college and it’s always worked very well for me. “Looking back at the situation, I should have stayed and argued with her and made a scene until a manager came to witness this girl’s attitude,” he writes. So now he wishes he would have stayed and made a scene because that’s what all wonderful customers do.

Josh, we all have moments we wish we could relive. It pains me still to this day that when I had my gym shorts pulled down in the middle of the track in seventh grade, I didn’t go ballistic on those assholes and have them all expelled, but I didn’t. I let it  go. Your points are all valid; disappointing service is a good reason to leave a negative review. But you didn’t stop there, did you, Josh? No, you didn’t.

Josh pulled up a photo of the staff and posted it in one more comment specifically pointing out which cashier he thought was rude to him, calling her the “heavier set gal on the bottom row, clear to the right.” As if simply saying the “gal on the bottom row, clear to the right” wouldn’t be enough, but he wanted to bring up her appearance. When another commenter called him out for bringing up the weight of high school girl, he replied with, “if I was calling her out because of her weight, I would have called her fat.” Semantics, Josh. Semantics. “Heavy set” is the same as “fat.” Ask any boy from the 70s what they thought it meant when they had to buy “husky” jeans or ask any girl who was told they have “such a pretty face.” It means that someone thinks they’re fat. Josh quickly edited the comment, leaving out the “heavy set” part, but through the beauty of screen shots, his callousness lives on. And he never bothered to take down the second comment claiming he never called her fat. 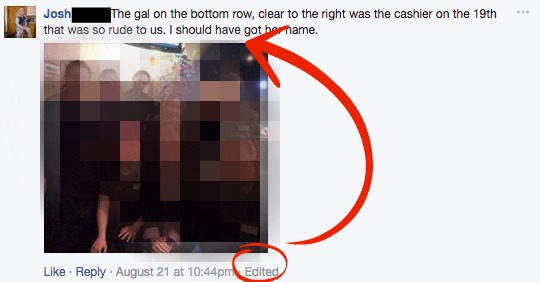 Josh, you have every right to leave a one-star review for bad service, but bringing up the physical appearance of a staff member has absolutely no bearing on anything and says a lot more about you than your review does about the restaurant. I challenge you to take down the portion of your review that insults a young woman. Shaming does not feel good as you will probably find out as soon as this blog post goes live.

6 thoughts on “Did a Man Just Call a Server Fat in a Facebook Review? (Yes.)”