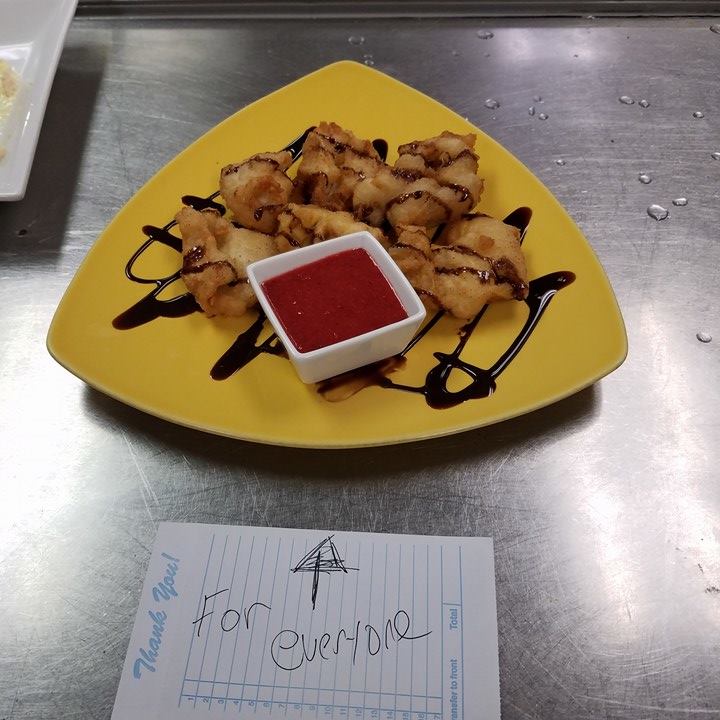 Once upon a time, there was a restaurant with a bunch of lazy AF servers who never stabbed their tickets after they pulled the food from the window. No matter how much the kitchen crew asked them do it, the servers simply would not.

But still it kept happening. One day, a cook decided to teach them a lesson they would never forget. Knowing that all servers are scavengers for food who will eat anything if it’s placed on a clean plate, this cook came up with an idea.

He gathered several tickets from the window that had not been pulled or stabbed and he carried that pile of grimy, greasy slips of paper over to the fry line. One by one, he dropped those tickets into a bowl of batter and then gently placed these battered tickets into the fryer basket. Slowly, they were lowered into the hot oil and with great joy, he watched those pieces of paper become a deeply satisfying golden brown, curling up like a churro or a sopaipilla. After two minutes, he pulled his new creation out of the oil and plated them onto a pretty triangle-shaped plate. With great care, he drizzled those nasty ass tickets with some chocolate sauce and added a ramekin of raspberry coulis onto the plate to make it look even more inviting. His final step was to create a sign that encouraged the servers to enjoy this tasty treat.

“For everyone,” he scrawled out onto a not-yet-fried ticket and he stood back to watch what would happen.

Servers, having an innate sense of when there is food in the kitchen, came out of the woodwork like cockroaches on bug night.

“Is that for us?” they exclaimed.

“All for you,” said the cook, with a devilish grin. “Enjoy.”

And one by one, he watched those lazy AF servers put these fried tickets into their mouths and begin to chew. It was with great pleasure that he watched them realize they were not eating fried bits of delicious dough, but instead were trying to chew fried scraps of old paper.

“What the fuck is this?” they asked. “Is this paper? Why are you feeding us paper?”

They all stared at this cook who they thought was giving them a special treat for being such wonderful people. Once he had the attention of all the lazy AF servers, he had just three words for them:

Thank you to Craig for sending me this photo and telling me this true story.