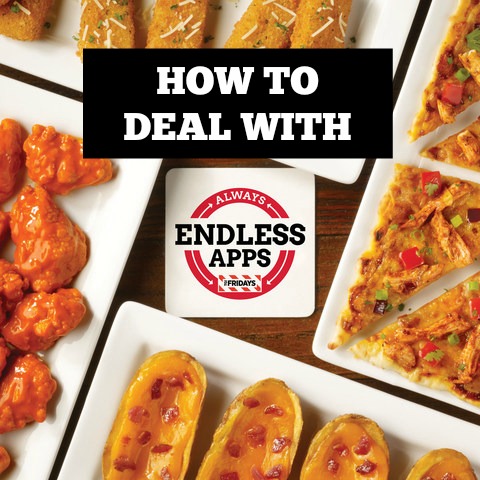 I’m a server at TGI Fridays and this endless apps is driving everyone who works here into having nervous breakdowns. I’m not making nearly as much money as I used to and am doing 4 times the work, being belittled and run ragged, staying hours later than usual and the clientele is awful. Corporate doesn’t care, but any advice on how to handle it?

First off, my deepest condolences to you and your coworkers for working at TGI Fridays. Having done my time at Bennigan’s, Houlihan’s and Pizzeria Uno, I understand your pain.

You are correct with your claim that corporate “doesn’t care.” They have their eyes on the bottom line and if they can sell 500 fried pickles to one customer for $10, they are still ahead because they probably bought 1000 fried pickles for a dollar and a hand job. TGI Fridays CEO Robert Palleschi is sitting at his desk (it’s made of BBQ Chicken Flatbread) and rolling around on a pile of Pan-Seared Pot Stickers counting his money and not giving a second thought to a girl named Krystal who has put holes in her non-skid shoes from making twelve trips to Table 10. So what can you do?

You have two options: quit or deal with it. I mean, that’s how it is for almost anyone who has a job, right? If it’s something that we absolutely cannot handle, then we have to find a new option that will make us happier. Just quit. After all, what is the point of living a live if we are miserable almost every day? If you hate it, change it.

Or you deal with it. In this case, you go to work and when Betty Lou and Bubba Ted plop their asses into the dirty booth and ask for an order of Endless Mozzarella Sticks and Loaded Potato Skins with two glasses of water and extra lemons, you take a deep breath and let it go. Sure, you know they are going to tip you two bucks and run your feet down to stubs, but when they’re gone they’re gone. You don’t have to think about them ever again. Go into the kitchen with your coworker bestie and complain together so you can get it off your chest and then slap that fake ass smile back on your face and get them their fourth plate of fried food. Not every single table is going to be this bad. That’s the beauty part of serving: every customer is different and for every Betty Lou and Bubba Ted, there is a Mr. and Mrs. Totally Nice Moneybags who might make up the difference. Every job has something about it that someone doesn’t like. Granted, some jobs have a lot to not like about them and if that’s the case, you go back to option number one, which is to quit. However, should you decide that serving Endless Apps is not a deal breaker, I would also suggest getting chummy with the bartender. It’s amazing how much more tolerable something can become if you have a steady supply of white wine, tequila or a Grey Goose Punch Shaker.

Mustard and mayo,
the Bitchy Waiter