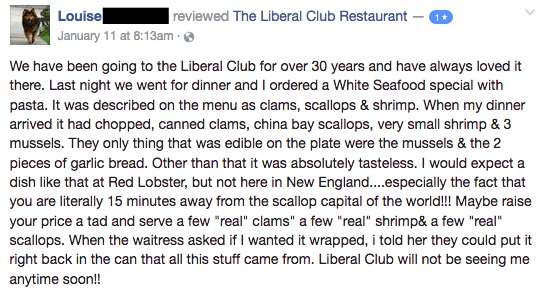 You know what I hate? (“Pretty much everything?” says anyone who has been reading this blog for for more than a couple of weeks…) I hate when people go onto Facebook and leave a 1-star review for a stupid reason. Case in point is Louise who has been going to The Liberal Club Restaurant for 30 years. Thirty. Years. Think about that- when she first started going to The Liberal Club Restaurant, stamps were still $0.22, The Princess Bride was a new movie and people thought acid washed jeans were cool. In those thirty years, she always loved it, but one fateful Wednesday night in January, everything changed. Louise showed up to the restaurant and did not like what she ordered, claiming that the dish had canned clams! The restaurant disputes that on a Facebook post, but the point is that Louise, after loving this place for three damn decades, had one meal that she didn’t like and now this place is dead to her.

C’mon, Louise. Say it ain’t so! Is that how you treat everything? Did you watch all 264 episodes of Murder, She Wrote and then in the last one, “Death By Demographics,” where a San Francisco radio station changes its music format from classical to rock and the promoter who engineered the switch dies, did you suddenly decide that Murder, She Wrote sucked?

“Well, why would Jessica search for his killer? He deserved to die if he wanted to switch from classical music to rock music! One star, Jessica Fletcher! One star!”

Or what about your kids? Did you love them up until they were 30 years old and then one day, your daughter told you she wouldn’t be able to drive you to to CVS to get your flu shot and then you had to start hating her?

“I was in labor for fifteen hours with you and you ripped my vagina apart like a piece of velcro on a pair of running shoes and you can’t do this one thing for me? One star, Louise, Jr.! One star!”

When the waitress asked if Louise wanted the food to be wrapped up, Louise came up with this great response: “They can put it right back in the can that all this stuff came from!”

Got it Louise? A restaurant that has been serving you for thirty years more than likely wants to have you patronize their business for another thirty years or until you die, which ever comes first. (Death, probably…) If you took umbrage with your dish, use your words and speak to someone at the restaurant. If you have really been going there since 1987, I would guess that you have some kind of relationship with someone there and you would feel comfortable letting them know in person that you are disappointed with this visit. Don’t just be a coward and complain about it on Facebook.

And while I’m at it, let me address someone else who commented on the review.

Donna, who is probably a friend of Louise, seems upset that The Liberal Club responded to Louise in a public manner and suggests that it was unprofessional of them to do so. She thinks they should have reached out to her privately. Wrong, Donna. If the customer is going to complain publicly, then the restaurant has a right to respond publicly. They clapped you right back in your place, girl.

To Louise and Donna, I give you each one star for your Facebook reviews. One star! And to The Liberal Club I give you five because you know how to handle a bad review professionally and confidently while getting your point across. You did not use snark and I am extremely impressed. Maybe someday you can teach me what it’s like to write something without snark. I don’t understand how to do that.

My final question for Louise is this: in the thirty years that you loved The Liberal Club so much, did you ever bother to leave a 5 star review anywhere? Yeah, I didn’t think so. 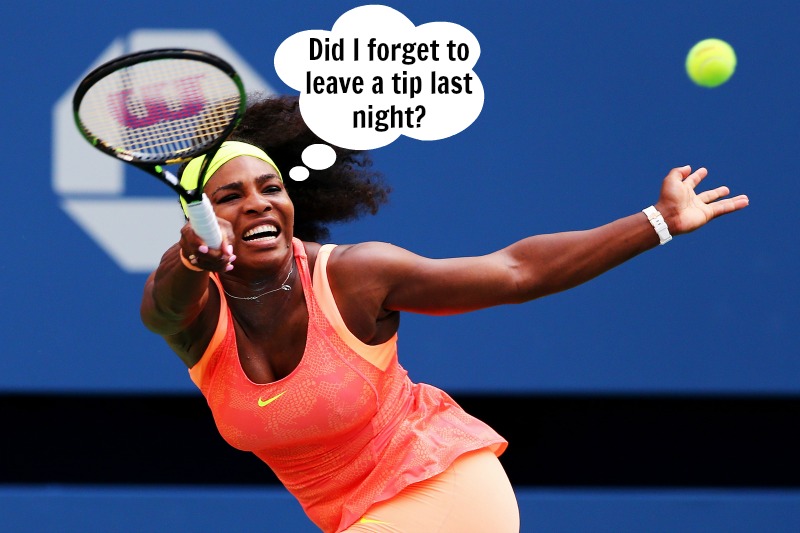