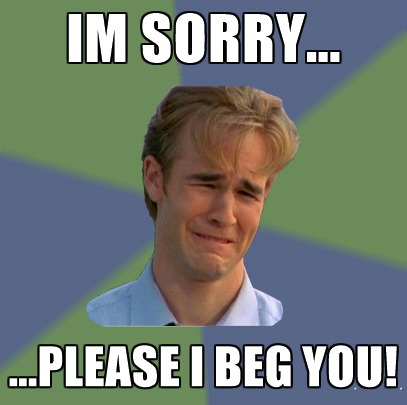 Alright, when I make a mistake, I take ownership of it. It can be awkward and embarrassing, but it’s really the best way to handle a situation. One time I was at work and totally forgot to ring in an order for a table. It was just one of those things where you are walking to the computer to put the order in when another table asks for something so you go to grab the spoon for their soup and then you see that there are no soup spoons so you have to go to the kitchen to find one and the next thing you know, ten minutes have passed by and  you haven’t rang in the well-done hamburger yet. It happens. Rather than making up an excuse, the best way is to be honest with your customer and tell them the truth.

“I’m so sorry, but your food is taking longer than it should because I forgot to ring it in. Let me get you some more iced tea and I promise to get it out as soon as it’s done. I just didn’t want you to think that it always takes this long for food. I screwed up and I’m sorry.”

Done. Then the customer knows why it’s taking a while and they won’t assume it will be like that every time they eat at your restaurant. Nine times out of ten, they will appreciate the honesty. One time out of ten, they won’t, but you will know you did the right thing.

Anyway, I made a mistake. Yesterday, someone sent me a link to a comment that they saw on another blog post. It was a derogatory comment about waitresses and what was so shocking about it was that it allegedly came from a company that services the restaurant industry. Surprised to see the comment, I took a screenshot of it and posted it on their Facebook page asking if this is how they really felt. That was my attempt to verify if it was a real or fake comment.

Well, when I posted that photo onto their Facebook page, that post showed up in the news feed of all the people who follow me. I should have known that would happen, but it honestly did not occur to me. Before I heard back from the company, lots of people took it upon themselves to go to their Facebook page and bash them with 1-star reviews. I did not expect that to happen and maybe I was foolish to not have enough foresight. Honestly, I did not expect it.

Consequently, they got over 100 bad reviews for no reason. I spoke with the guys at Bar Products and they have successfully gotten the original comment removed from the blog. We have confirmed it was a spam account and the comment did not represent how they feel about severs. If you are one of the people who left them a bad review, I hope you will consider deleting it or changing it. I suppose you could go leave them a 5-star review to combat the bogus 1-star reviews. “But I’ve never even used their product, how I can rate them?” you may ask. Good question. However, maybe it’s okay to fight fire with fire and if we are trying undo bogus bad reviews, where is the harm in submitting bogus 5-star ones?

I feel bad about this and want everyone to know that Bar Products did nothing wrong. It was my fault. I was careless and I hope they will forgive. I also hope you guys will allow me the chance to make this wrong right.

Here is their Facebook page if you want to show them some love.

Now if you’ll excuse me, I’m going to attempt to pull the foot out of my mouth.

2 thoughts on “This Is Me Admitting I Screwed Up”