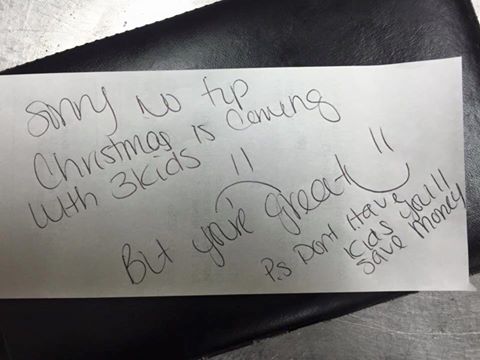 Christmas is just a few short weeks ahead and already people are worrying about how they are going to pay for all the massive amounts of presents that commercialism has made them feel they need to buy. Some people save throughout the year with a Christmas club account at their bank, while others put everything on a credit card and worry about that minimum payment after the new year begins. Some others have decided that the only way they can possibly afford gifts is by stiffing their server when they go to eat at a restaurant.

Case in point is the above photo of someone (I’m going to assume it’s a woman) explaining why she was unable to leave  a tip:

This pisses me right the fuck off. First of all, did it even occur to her that maybe the server has three kids who might also like some fucking Christmas presents? And if not kids, maybe the server has someone else in their life that they might like to buy a present for. This customer seems to think that she is the only person in the world that has Christmas approaching. Millions of people are celebrating Christmas and if they aren’t celebrating that holiday, maybe they observe Mawlid al-Nabi, Kwanzaa or Festivus. Don’t try to make your Christmas holiday anymore important than someone else’s holiday that also falls in December.

Secondly, the use of the little sad face/happy face does not disguise that fact this is a shitty thing to do. If you aren’t going to leave a tip, grow a pair of holiday balls and tell your server face to face. Don’t be a coward by scribbling a stupid note at the end of the meal after the server has done everything for you fully expecting to be tipped for the service that was given. I hope Santa brings this woman two lumps of coal that she can shove right up her ass.

Thirdly, a verbal tip is useless. No amount of “you’re great” is going to pay for the electric bill, buy groceries or a Cabbage Patch Doll. (I’m almost 50…that was the hottest Christmas toy when I was a kid.)

Finally, thanks for the advice about how not having three kids will save you money. That is truly invaluable input that maybe someone should gave given her before she pushed out three bundles of joy from her sweet potato pie hole. No shit, it costs money to have three kids. Unless you don’t plan on feeding them or clothing them, kids are a money pit. You signed up for it each time you caught a hot load and no one else should have to suffer because your kids are expensive. I have plenty of money because I decided to not have kids. Instead of spending money on school clothes, piano lessons and braces for my kids, I spend my money on cocktails, vacations and braces for my own damn teeth.

I hope this woman sees this blog post and knows how many times her note was shared across the Internet. Maybe then, she will realize that she’s a cheap no-good customer looking for ways to justify the fact that she doesn’t want to tip. I have a feeling that even if she didn’t have three kids, she’d still be a cheap fuck.

93 thoughts on “Christmas is Coming, So Don’t Tip Your Server?”