If you know me, you know how much I enjoy finding some random asshole on Yelp who gave a 1-star rating to a restaurant for a stupid reason. I then then like to bring that review to the attention of the dozens and dozens of people who read this blog. Today’s Random Asshole is a guy named Kevin O. who gave one star to a San Diego restaurant called Lazy Dog Restaurant and Bar. I guess Kevin was celebrating his dog’s birthday last month. His dog is named Mama which opens up a Pandora’s Box full of mother issues and bitches. Kevin took Mama to Lazy Dog because they are dog friendly. When he got there, he explained to the hostess that it was Mama’s birthday and “told her to call the owner, talk to the manager, do whatever she could to impress” him and Mama. You know, because the hostess needs to drop what she’s doing and bow down to this three-year old bitch and lick her nether regions for her. Kevin met the manager Melissa who he says was “really good” and he told her to make something special for the birthday dog. You see, even though the restaurant has a dog menu with a grilled hamburger patty and brown rice or grilled chicken with brown rice, Mama deserved something not on the menu because she is a prized bitch and ordering off the menu isn’t good enough for her. When Melissa showed up with a bowl of watermelon and rice with a fucking candle on it, that was not good enough for the fanciest Mama in the whole world. So Kevin fed Mama some ice cream off his spoon but Melissa said that was a no-go. Even though Kevin licked the spoon clean after Mama had eaten off it, Melissa informed him that she would have to throw away the spoon. (Full disclosure: I have a dog and I do NOT share a spoon with him. He licks his ass far too often for me to want to share saliva.) Kevin told Melissa that he would leave the spoon out so she would know which one Mama had spread her Mama-ass germs all over. But Kevin didn’t do that because Kevin wanted to be an asshole. Instead, he left this utterly charming note:

Dear Melissa,
Let’s play a game. One of these spoons I used to feed my dog. The others are clean. Do we throw all out? But wait, the adjacent spoons are also contaminated. As well are the adjacent forks and knives. You must choose. Waste them all or sacrifice! 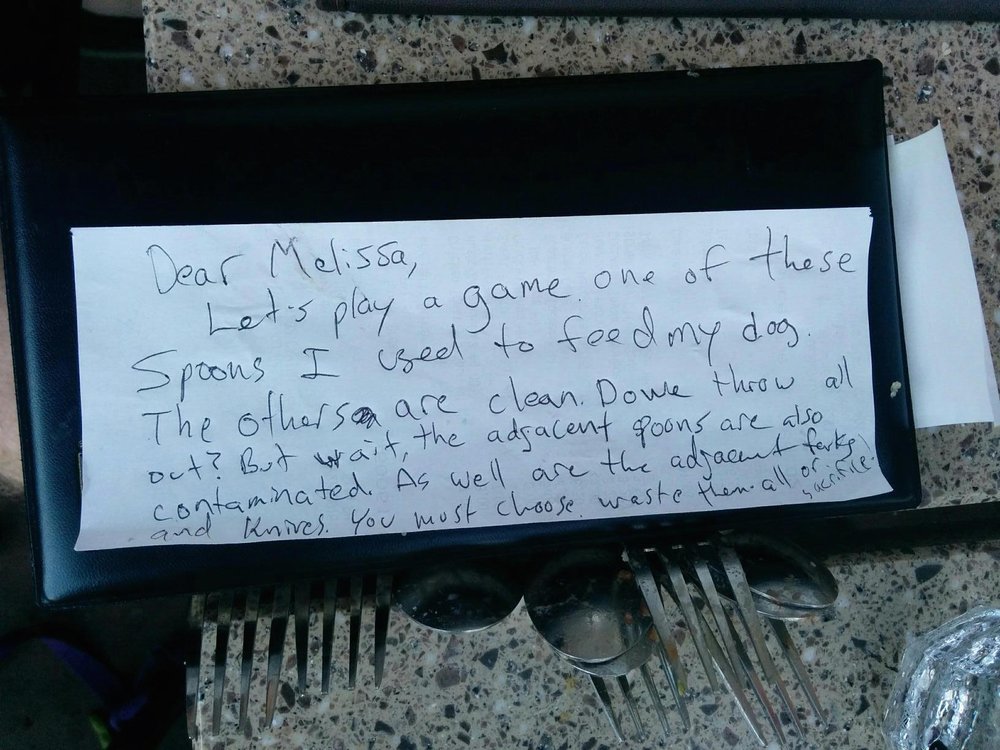 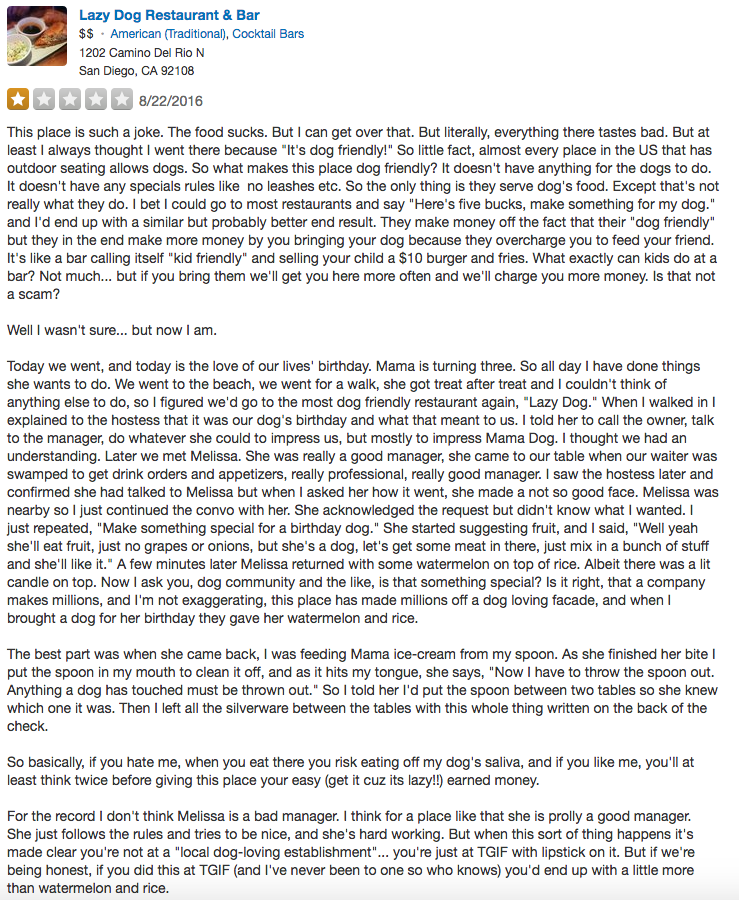 Listen, Kevin. You’re being a dick. The Lazy Dog Restaurant is dog friendly, but it doesn’t mean you can act like you do at home. Mama can lick your spoons, lick her asshole, lick your taint or lick whatever the fuck she wants at your house, but not at a restaurant. They had a dog menu that wasn’t good enough for you or that bitch Mama, but you’re going to leave one star because they only brought her watermelon with a candle? What did you expect, a sirloin steak covered in peanut butter with a sprinkling of bacon bits served on a bed of your tired ass dirty underwear that she loves to cram her snout in? They have rules on their website that you chose not to follow. Rule #3 specifically states that “your canine friend can’t eat off your plate or drink from your glass. We have special bowls just for them.” It goes without saying that silverware is included in that rule, but I guess they didn’t feel the need to say that because who the fuck lets their dog use a spoon in a restaurant? You say repeatedly that Melissa is not a bad manager, but you still have no problem leaving them a 1-star review because they didn’t want to bend the rules for you and Mama. Grow up. Anyone who reads that review is going to realize that you were the problem in that scenario and not the restaurant.

I hope you and Mama have a great life together sniffing each other’s assholes and rolling around in your own feces. The next time you take her to a dog friendly restaurant, why don’t you follow the rules and act like a responsible dog owner? My actual human mama always told me that if I can’t say anything nice don’t say anything at all. I love my Mom but I don’t always take her advice: you and your Mama are both a couple of bitches.