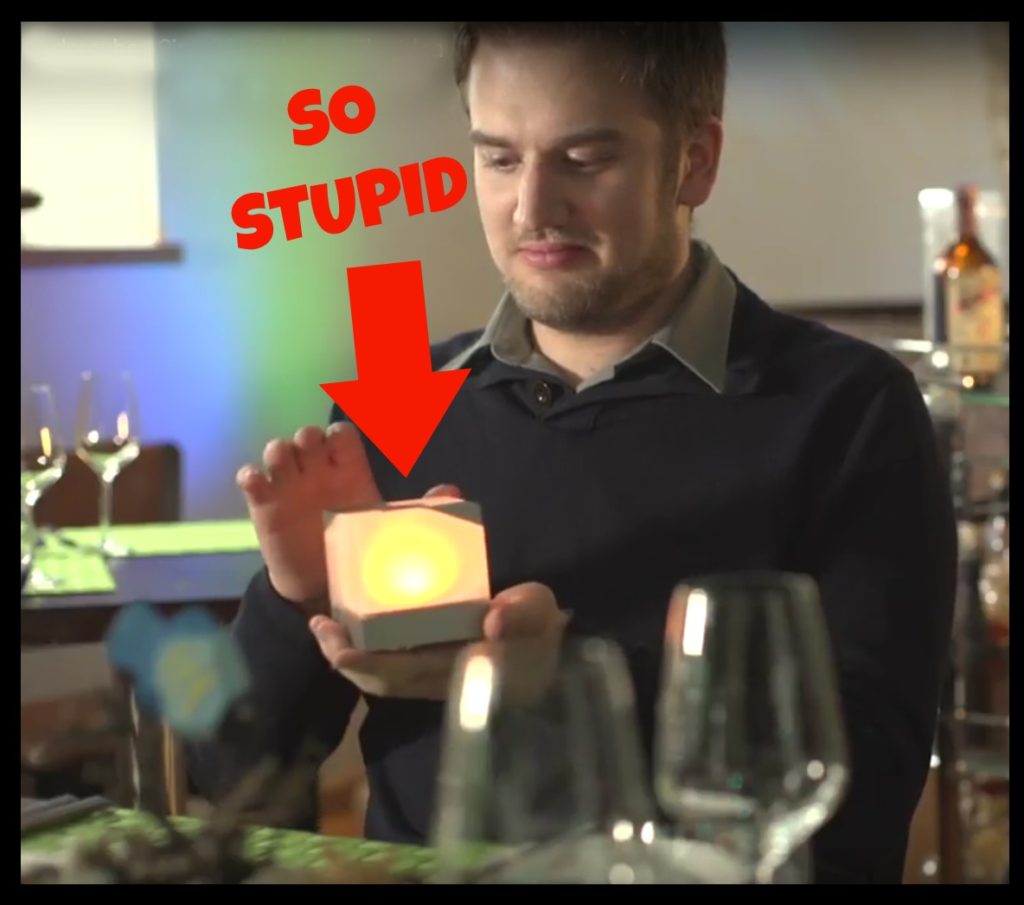 For years, people have been trying to find ways to infuse technology into restaurants in order to make things better for the customer. Like the tablets that have popped up at so many restaurants around the country and allow customers to order apps or refills, we now have the latest and most ridiculous piece of technological crap to grace our section in a long, long time. It’s called Ordercube and it’s even more stupid than the name implies.

According to co-founder Igor Suslov, ordering food in a restaurant is way too complicated and needs to be simplified. So he came up with this idea of a little box that changes colors as you sit at the table. When you are ready to place your order, you can simply tap the cube and it lights up green. That is the cue for the server to drop whatever the fuck he is doing and rush over to your table to see what you need. Ordercube gradually turns from green to red. After too much time has passed, the cube then begins to pulse so that the waiter will totally, for sure see it now and know that you are in need. “No way the waiter will not see the client now!” says the website.

“Imagine a world where you do not have to care about the waiter’s attention anymore,” he says. Yes, imagine that, Igor. Imagine a world where you can completely ignore the human being who is trying to make your dining experience a good one. Never mind that he has other tables to attend to and lots of work to do that most customers are not even aware of. Let’s just imagine that you, with your stupid box all lit up and pulsing in red, are the only one who matters in the restaurant. And when you need another glass of wine, even though your server just asked you two minutes ago and you ignored him, now all you have to do is tap your little box and make the light turn green. And by the way, if it’s pulsing red and the server still hasn’t come over to you, it isn’t necessarily that he hasn’t noticed it. It might be that he resents being summoned by a box rather than actual person to person communication.

Igor wants to know why an airplane has a flight attendant call button but there is nothing like that for restaurants. I’ll tell you why, Igor. An airplane like an Airbus A319 seats 126 passengers. There are usually about four flight attendants to take care of all those people. But maybe one of those flight attendants is going to take care of the 12 passengers in first class, leaving the other three to take care of the remaining 114. That means that each of those flight attendants is responsible for 38 people who were all seated at the same time and will leave at the same time. In a restaurant, it’s very rare that three servers would be taking care of 114 people who all came in at the same time. And if they are doing that, they have a support staff around them like bussers, food runners, bartenders, etc. Flight attendants don’t have that which is why a call button is helpful. They don’t have a bus boy wandering up and down the aisle of the plane making sure everything is okay. In a restaurant, we do have that. If you need something and do not see your server, you can usually make eye contact with another server or ask the busser who may be filling up your water. What we don’t need is a little plexiglass cube that lights up to tell us how and when we should do our job. If I am trying to get a 10-top’s food out of the kitchen, I am not going to stop doing that because I saw some asshole at Table 15 tap his stupid fucking Ordercube.

Who knows? Maybe this product will be a huge success and within a couple of years, all of us servers will be scanning our sections looking for green lights, ready to run out to serve before the light turns to red. We can be just like Pavlov’s dogs. When they heard a bell ring, they began to salivate. When we see a green light, we will automatically ask how you like your burger cooked. Good luck, Igor. If you want this to happen, might I suggest selling it to Applebee’s or Chili’s? They love stupid shit like this.

11 thoughts on “Introducing: the Stupidest Restaurant Technology Ever”