It’s Thursday morning and I have nothing better to do than to troll the social media pages of popular restaurants to find something to write about and make fun of. When all else fails, I know I can go to Olive Garden’s Facebook page and scroll down through the posts until I find a gem. And here it is:

Had a very disappointing costumer service down to the management, from there restrooms to the tables and the staff it…

Poor Isabel had a disappointing costumer experience it and I feel so bad for her. Nothing can ruin a day more than going to your local Olive Garden and not getting the costume that you wanted.

You see, it appears that Isabel was having a masquerade party this weekend and she had her heart set on dressing up as a Marie Antoinette. She thought it would be funny to scream, “Let them eat cake” all night to her guests and then hand out slices of Olive Garden’s White Chocolate Raspberry Cheesecake. Well, Isabel went to Olive Garden to pick up her costume and cake only to learn that the Marie Antoinette costume had already been rented out that day. Isabel had forgotten to make a reservation for the costume and her arch enemy, Lucinda, had already rented it. The only costume left for Isabel was that of Betsy Ross.

“But I don’t want to be Betsy Ross,” whined Isabel to the manager.

The manager apologized to Isabel and explained that the Marie Antoinette costume is the most popular costume at the restaurant, but Isabel would not listen.

“I demand that I get to be Marie Antoinette. If you don’t give me that costume, I will never come back here again!!” she screamed.

With slow and deliberate speech, the manager explained that the costume was gone and that if she wanted it badly enough, perhaps she herself should ask Lucinda to trade with her.

“I am so angry right now that I need to go take a poop! Where is the restroom?” she wanted to know.

The manager pointed to the back of the restaurant, because really, where else would it fucking be? When Isabel got inside the restroom, she noticed that it was sparkling and clean. It smelled of bleach and on the counter were fresh-cut gardenias. The porcelain toilet sparkled like diamonds and the floor was clean enough to eat off of. (Isabel proved that fact by reaching into her purse to find a handful of Ritz crackers which she promptly threw upon the floor and then picked up again to ingest.) Still angry with the restaurant manager for giving her such a disappointing costumer experience, she decided that she would defile the restroom in order to exact revenge. She pulled all the paper towels out of the dispenser and unrolled toilet paper and tossed the refuse around the restroom. After she finished the business that she went in there to do, she reached into the toilet to further defile the restroom, but thought better of it. She washed her hands, but left the water running.

“Your bathroom is filthy!” she screamed at the manager as he was packing up her Betsy Ross costume.

“Would you still like thirty orders of the White Chocolate Raspberry Cheesecake?” he asked her.

“No!” she bellowed. “My God, NO! Why would Betsy Ross give out cake? That is the most ridiculous thing I have ever heard of. Give me thirty orders of Dolcini instead! God, I HATE this place! This is the most disappointing costumer service I have ever experienced!”

She grabbed her Betsy Ross costume and her desserts and stormed out of the restaurant, unknowingly leaving behind the wig and hat. The manager saw this, but didn’t bother calling after Isabel because he was tired of being mistreated by this sad woman who failed to reserve the Marie Antoinette costume.

When Isabel got to her car, she pulled out her phone to snap a picture of the worst Olive Garden in San Antonio. 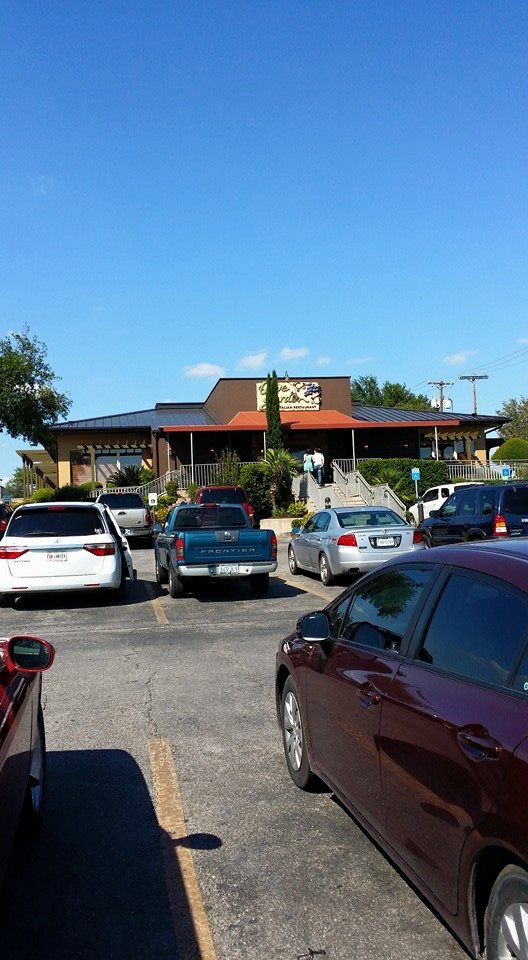 “The worst,” according to Isabel.

She logged into Facebook so she could properly vent her frustration on their page with the hope that she will eventually receive an email coupon for a free dessert the next time she comes in. She posted her picture and expressed her severe disappointment with her costume experience. She went home to prepare for her masquerade party.

Later that night when Lucinda showed up as Marie Antoinette, Isabel could hardly take it.

“Nice costume,” Lucinda said to Isabel. “You sorta look like you tried to be Betsy Ross, but where’s your wig and hat?”

Isabel snatched the wig off of Lucinda’s head and grabbed three orders of Dolcini and shoved them down Lucinda’s throat, effectively ending the party and ruining the night.

As the last party guest ran out of the house, Isabel sat on the floor alone sobbing.

“Why Olive Garden? Why? Why must you give such awful costumer service?”

14 thoughts on “Is This the Worst Costumer Service Ever at Olive Garden?”