Thank you to everyone who sent me the video of the most kick ass waitress in all the land. She lives somewhere in Russia and when one of her customers tried some monkey business with her, she reached back into the USSR and cold-cocked him. “You don’t know how lucky you are!” she screamed at him because according to the video, she looks tough enough to babushka his ass right back into the cold war.

Not a lot is known about the video, but it appears that when it came time for the customer to pay his check, he attempted to put some rubles into her top. Well, Russian Waitress does not go for that and pushes him back so hard that his drunk ass falls off the barstool. Undeterred, the asshole gets up and grabs her ass. Again, Russian Waitress is all, “Nyet!” and she slaps him with her menu, her braided pony-tail barely even breaking a sweat. He still won’t take nyet for an answer and head towards her once again and this time she really lets him have it. She reels back so hard that she almost touches Alaska and slams that menu into his head with all the power of Vladimir Putin behind her. I’m surprised he didn’t break apart and a bunch of Russian nesting dolls didn’t come tumbling put of him. As the customer falls to the ground, Russian Waitress strolls back to the sidestand to take a sip of her vodka and a bite of her shift meal, Beef Stroganoff.

It’s not surprising that the waitress stood up to this asshole, but what is surprising is how everyone there seems only concerned with how he is after she knocks him down. No one bothers to see if she is okay. Even her co-worker ignores her and runs behind the bar to get the “victim” some ice or a towel or something. Several men rush in to attend to their fallen comrade and help him up and out of the bar. Meanwhile, Russian Waitress is all, “Somebody needs to call der kommissar because I was just assaulted. Ummm, hello?”

Russian Waitress, you’re my hero of the week. You are taking names and kicking ass and if anyone is going to give you any shit, you’re all, “do svidaniya, bitch. Let me introduce your face to my menu.” You know that tough bitch Natasha from Rocky and Bullwinkle? She ain’t got nothing on you. 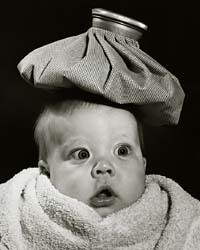