Home
/
Uncategorized
/
Mistletoe, Drones and TGI Friday’s Do Not Mix

Last week, a TGI Friday’s in Brooklyn launched what may be the dumbest idea in the history of holiday restaurant promotions. It’s called “Mobile Mistletoe” and it’s a remote-controlled drone that has piece of tired-ass mistletoe stuck to it and then some TGI Friday’s employee flies it around the restaurant so that people can kiss when it hovers above them. Yeah, nothing can go wrong with that. It sounds safe to me and I know that whenever I’m having a plate of Bacon Mac & Cheese Bites at TGI Friday’s, the only thing that can make that experience better is having blades of steel, inches from my head, spinning at a million rpm’s. Oh and with a poisonous plant hanging from it makes it even more terrific.

According to the New York Post, photographer Georgine Benvenuto was there covering the store for the Brooklyn Eagle because she apparently drew the shortest straw at work that day. As all the other photographers were taking pictures of protest marches and racial injustices, she was at TGI Friday’s snapping pictures of a mechanical holiday cheer spreader. The operator, David Quiones, was attempting to land the drone on a reporter’s head when it began to spin out of control. Again, nothing makes your visit to TGI Friday’s more exciting than having a drone land on your head. The blades ended up cutting Benvenuto’s face on her nose and chin. It also got caught in her hair. (Cue the woman at Table 17 to grab a a coupe of those stray hairs and toss them onto her Pecan Crusted Chicken Salad in an effort to get her meal for free.) 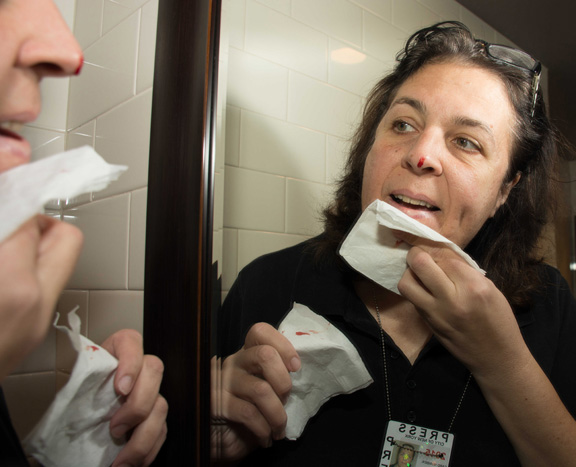 Benvenuto says that she is not going to sue but she does question whether or not drones in restaurants is a safe idea. A TGI Friday’s spokeswoman sharted out a statement claiming, “This was an isolated event during a demonstration for the reporter and photographer only, given by the licensed operator of the drone during the last day of this particular promotion,” she said. “Of course, safety is our first priority and we are sorry that this isolated incident occurred.”

I dunno, y’all, do we really need drones in a restaurant flying around with mistletoe? Can’t the manager just give the hostess ten extra bucks to wear a Santa hat and run around with mistletoe hanging off a long stick? And looking at that video, the drone creates quite the wind gusts as it’s whizzing overhead. Isn’t that just asking for someone to complain that their Baby Back Ribs got cold because if it? And what about when a piece of that mistletoe falls off into someone’s White Cheddar Broccoli Soup and makes them sick? (Wait, it’s TGI Friday’s, nevermind…)

Anyway, Merry Christmas, everyone. Please stop by my restaurant this weekend where I will be shooting egg nog from a Water Blaster and garnishing all my plates with sprigs of ivy and holly berries. 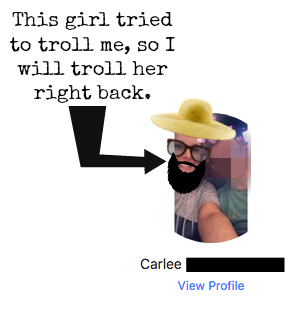