If you’re looking for a way to earn some quick cash, there are a few options: you can go through your closets and find some old electronics to sell on Craigslist, you can pick up an extra shift from the food runner on Monday lunch and get an extra $15 or you can order some hot coffee at Denny’s and then spill it all over yourself and then sue those mother fuckers for serving you hot coffee.

A family in Upstate New York chose the third option and sued Denny’s when their 14-month old little girl spilled a cup of coffee on herself. The child suffered first and second-degree burns and the family gave evidence that stated the girl will need a lifetime of medical care. The case was settled out of court for $500,000, the family claiming that it was the negligence of the waitress that caused the accident because she should not have put the cup of coffee anywhere the child could reach it.

First off, let me say that I feel awful that a baby got all burned up by hot coffee. I’m sure it was not a pleasant experience for anyone involved. According to Wikipedia, first and second degree burns need anywhere from five days to three weeks to heal, which is a far cry from a “lifetime,” but I can only assume that the skin of a 14-month old is more easily damaged than the dry, wrinkled and leathery-like skin of the 47-year old man who is writing this blog post. What I take issue with is that the parents. Rather than taking responsibility for their own child, they feel fine in blaming the waitress for allowing this accident to happen. Let’s imagine that the baby was probably in a highchair and has the normal height of a 15-month old girl which is about 30”. Unless this baby is some kind of neanderthal-like orangutan with knuckles that drag the ground, her reach would be far less that 12”. It seems highly unlikely that any waitress, no matter how inexperienced, would put a cup of coffee within a few inches of a baby. And even if she did, isn’t it the parent’s responsibility to be aware of what is happening around their baby? Could it be possible that the waitress set down the cup of coffee far enough away from the baby, but the parents were the kinds of parents who let their kid stand up in the booth and reach across the table to grab shit when they aren’t looking because they are too busy texting on their cell phone or Instagramming a picture of their goddamn Lumberjack Slam®? Yeah, it’s possible.

And how much do you want to bet that if the coffee wasn’t hot enough, they would be the ones that would leave a 10% tip and then write on the receipt something like “Coffee was ice cold!!” Look, I’m really sorry that this kid got some coffee spilled all over but where’s my half a million dollars for that time a customer wasn’t paying attention and bumped into me making me spill a whole pot of coffee all over myself? All I got was a stained apron, a red welt on my arm for a week and a “sorry, I didn’t see you there.” This country will let you sue for anything and Denny’s was scared to go to court so they just wrote out a check for $500,000 and called it a day. (In other words, this family can now afford 125,000 orders of the $4 Everyday Value Slam®)I recently saw an image online of a paper coffee cup in Canada that made of fun our litigious society. It’s ridiculous what people will sue for (and again, I am not doubting that the little girl was hurt), but c’mon. People need to take some fucking responsibility for their own actions and quit looking for a way to cash out on every opportunity. It’s like suing McDonald’s because you’re fat. Or suing the beach because you got a sunburn. It’s maddening. 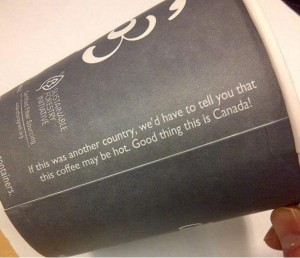 Pretty sure they are making fun of Americans.

From now on, Denny’s servers, when you place a cup of hot coffee on any table with a child at it, I would suggest putting that coffee inside a locked safety deposit box. The key to that box should be inside a sealed envelope and given to the parents who then must sign a waiver stating they are aware that upon opening the safety deposit box and retrieving the hot coffee, they are accepting full responsibility for anything that could potentially happen with that hot coffee. After signing the waiver and having it notarized and faxed to the manager, only then can they have the coffee. Of course at this point, the coffee will be “ice cold” and the server will have to take it to the microwave to heat it up for two minutes and start the whole process over again. Or just serve iced coffee from now on, but I can totally see that someone suing because “that ice cube stuck to my tongue and ripped off part of my taste buds and now I can’t enjoy food anymore.” My answer to that would be, “Who the fuck cares? You’re at Denny’s.”