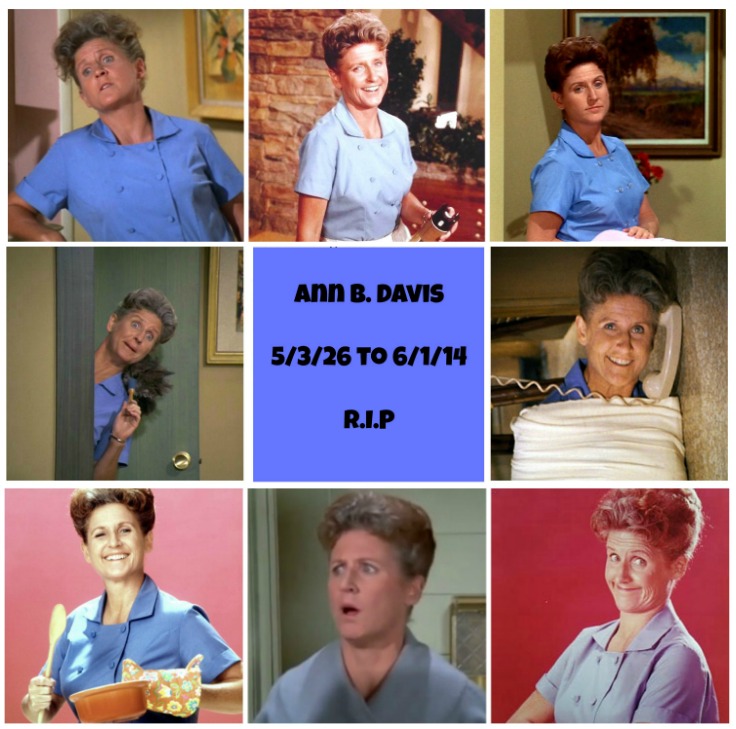 So this Sunday was just an ordinary Sunday of ham and cheese omelets, customers Instagramming their food and me serving coffee that wasn’t hot enough. It all seemed normal enough until I got home from work and looked at Facebook. That is where I found out that Ann B. Davis died. She fell down in the tub, hit her head, went into a coma and then floated off to heaven where she doesn’t have to wear a blue maids uniform anymore. What the fuck? Ann B. Davis is no longer on this earth? No wonder things seem just a little bit sadder today. She played Alice on The Brady Bunch from 1969 until 1974 and sometime during the mid to late 70’s, she captured my heart. I never watched The Brady Bunch when it was on in prime time. I was first captivated when it began playing in reruns and I would catch it after school at 3:30 on some channel that I could only get clearly if the antenna was just right. I don’t know what it was about The Brady Bunch that made me like it so much. It’s not like I was having a horrible childhood and watching their idyllic lives gave me hope that mine would some day be better. My life was good; it was me and my two brothers and our parents, happy and content. But something about The Brady Bunch appealed to me. Maybe it was the fact that they had two-stories in their home and to me that has always epitomized a “dream house.” Perhaps it was that they had brushes with famous people like Joe Namath and Davy Jones. Most likely, it was that they had a maid named Alice.

It’s not that I wanted to have someone living with me who did all the cooking and cleaning, because my Mom already did that for us. (While working full time, by the way, which now I understand was incredibly difficult, but as a kid I simply thought it was no big deal.) Alice was more than a maid. She was a best friend to Greg, Marcia, Peter, Jan, Bobby and Cindy. Later on, Oliver joined the family, but no one really gave a shit about him and I’m sure Alice felt the same way. He was fucking annoying. They all knew they could trust her if they had a problem they couldn’t share with their parents, but more importantly, they knew that she would be making them some pork chops and apple sauce for dinner. The loved Alice, even though we don’t know if they ever allowed her eat and she seemed to be on call 24 hours a day. It was like she was the slave for the Brady’s, but gosh darn-it, they loved their slave. Every once in a while, they would give her the night off and she could go bowling with her boyfriend, Sam the Butcher, and we can only hope that he gave her a special cut of meat if she bowled over a 100.

Alice was cool and if you don’t believe me, how else would you describe this quote from Episode #52, “Juliet is the Sun” when describing Marcia? “I know she’s groovy. You know she’s groovy. But she doesn’t know she’s groovy.” Oh, Alice, you’re so fucking groovy. I also loved her because I know that she cooked some bad ass Mexican food and she described it as coming in “three degrees: hot, very hot  and pass the extinguisher.” I wish I could get a taste of Alice’s enchilada. I recall Alice playing basketball with the boys on more than one occasion which tells me that she didn’t take her job too seriously, but just seriously enough.

I dunno why I’m sad that Ann B. Davis died. I didn’t know her personally. My friend met her once at a church youth camp and I have always been jealous of him for that. I have since come to grips with the fact that some people got to meet Ann B. Davis and some didn’t. I guess I’m sad because I think of Ann B. Davis as eternally 40 years old and quick with the comeback and always prepared for dinner. In reality, she was 88 years when she died. It’s just another reminder that time keeps moving and every day that passes means our youth is just a little bit farther away. Ann B. Davis was 43 years old when The Brady Bunch started. I am older than that now. It seems like only yesterday that I was sitting at 2513 Plover Street in Victoria, Texas watching The Brady Bunch after school. The truth is that was almost 40 years ago. If the next forty years go by as quickly as the last forty did, I better start appreciating what I have in this life. Whenever we lose a beloved TV icon from our childhood, it’s a sobering reminder that time is marching on.

In Ann B. Davis’ honor, I will be having a cocktail tonight and that cocktail will be one that I got from her cookbook. Okay, honestly, it’s just a recipe for lemonade, but I add blueberry vodka:

Dissolve the sugar in the hot water and allow to cool. Pour the lemon juice, water and sugar mix into a pitcher and stir. Add a shitload of blueberry vodka. Add ice for the best drink on a hot summer day.

Rest in peace, Ann B. Davis. I hope where ever you are, I hope someone else is making the meatloaf tonight.