Home
/
Uncategorized
/
A Comment on Comments, the Troll Edition 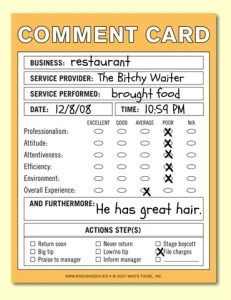 First off, let me apologize for the lack of new blog posts lately. Life is a little crazy right now because my bathroom is being renovated and I have not been living in my apartment. Currently, my toilet is in the living room and my bathroom is a pit that we refer to as Deathly Hallows. Needless to say, sitting at a dust-covered computer and writing hasn’t been a top priority. That being said, I posted a picture today on the Bitchy Waiter Facebook Page that elicited some comments that I need to respond to. The photo is that of a table in a restaurant that is covered in a mess because a child decided to put more food on the floor than in its face. It’s not just a few crumbs that fell onto the floor, it looks like mac and cheese and other pieces of crap that the parents had to see were being carelessly tossed to the floor through out the meal. 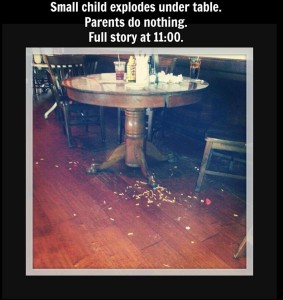 A troll came out from under his bridge and left several comments about the photo. This troll I shall call Bilbo Baggins, no offense to Hobbits. According to Bilbo’s Facebook profile, he works in a restaurant, judging by his profile picture, he has a little girl and based on the fact that he left at least twenty comments over the course of an hour, he has even less of a life than I do. Observe, the musings of Bilbo Baggins:

“As a fellow restaurant worker this post borders on entitlement. Do your job.” Yes, Bilbo, we will do our jobs, but we ask that parents do their job as well which involves teaching their children some fucking manners. We all know that if a kid was at home and threw his food around like a chimp throws his poop, the parents wouldn’t stand for it. Letting them do it in a restaurant means that the parents don’t care about anyone except themselves.

“I shouldn’t have to take five seconds to clean up crumbs.” Umm, look at that picture, Bilbo. That is not a five second job. How the hell does one sweep up macaroni and cheese? It’s not that simple. Even if you can get that shit into a dust pan, you still have to go back and wipe the floor. Five seconds my ass. And it takes even less time to just tell the kid, “Stop throwing your fucking food.”

“OMG did you guys call OSHA?” No, I doubt that anyone called the Occupational Safety and Health Administration but it sounds like someone did call the Overly Secure Hot-Headed Asshole club to let Bilbo know his comments were needed on the Internet.

“You guys should quit and go work in a coal mine.” Oh, right, Bilbo, like it’s so easy to apply for a job at a coal mine…

“Jesus Christ this new breed of servers are entitled pussies. It’s goddamn crumbs. People give you cash to press buttons and you bitch about a two minute job that you will probably just pass on to the busboy anyway. What are the crumbs taking time away from your fifth smoke break in 3 hours?” Okay, I see that Bilbo has reconsidered the length of time it would take to sweep this up and it has been increased by an additional 115 seconds. And by the way, I don’t have busboys at my job so sweeping is my responsibility. And I don’t smoke either. I can still be an entitled pussy if I don’t have a busboy and don’t smoke, right?

“When I’m out to eat I also order my own food, put it in the computer and cook it . I don’t want to be an asshole and actually make the people that work there actually so stuff.” Oh, I get it you’re being sarcastic. I can be sarcastic too, Bilbo, watch. That was so funny. You are just so witty and your comments are deep and thoughtful and create great impact on everyone who reads them.

“I also tip 40% so they can blow all their tips of drugs and alcohol when their shift is over.” No one who claims to tip 40% ever even comes close to tipping 40%. I bet your penis is nine inches long too, right?

“I hope you servers didn’t get black lung from sweeping up those crumbs.” It’s mac and cheese. The lungs wouldn’t be black, they would be Kraft yellow.

“I’ve been a server and a bartender for 15 years and this shit pisses me off. It’s an amazing job to have for people who didn’t go to college, artists, working class etc.
If you’re fortunate enough to land a job at a busy place you can make a comfortable living.” I couldn’t agree with you more, Bilbo. Where we disagree is on the idea that parents should at least make some effort to have their children behave and show some fucking respect to servers. The privilege of eating out doesn’t mean that people should do things that they wouldn’t find offensive in their own home. If those parents had some friends over for dinner and their friends’ baby left a pile of crap under their dining room table, you think they’d be okay with that? Yeah, I didn’t think so.

“STFU and be happy with the great job that you have. There are people working in much harder jobs who make half the money who would love to clean up crumbs for a hundred dollars a night.”  Oh, is this a coal mine reference again?

“Seriously, if sweeping up crumbs under a table offends you so much you are a loser of epic proportions with zero real world perspective. You should be forced to go work in a coal mine for minimum wage.” I am beginning to think that Bilbo works for a coal mine recruitment company and wants us to submit resumes to the human resources department of Coal Mines R Us.

I can’t anymore with Bilbo Baggins. Every time I go back to the post, he has left another comment. Thank you, Bilbo, for all your insight. I didn’t know what I was going to write about today, but your comments made it abundantly clear. Now go back under your bridge and forage for your own food because I am done feeding you.