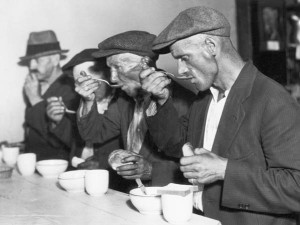 I am so fucking sick of hearing that phrase preface almost every single thing that anyone talks about. “Because of the current economic situation, we will be eliminating the W train” or “In light of the economy we must lay off a million employees” or “In observance of the economic climate, I will not be taking anymore craps.” We get it, everyone is broke. That does not give broke ass mother fuckers an excuse to not tip their waiters. If you can’t afford the tip, don’t go to a restaurant, okay? Case in point: four bitches came in last week and I knew from the fucking get go that they were going to crawl up my butt and chew me a new asshole to get out. As soon as they sat down the Queen Beech snapped her fingers with her ugly ass fake nails. I sauntered over. “Do you all have turkey products?” “Yes ma’am, we do. We have turkey burgers.” She brushed her weave out of her eyes and said “No, tur-key pro-ducts. Turkey bacon? Turkey ham? Turkey products.” I guess the answer then is no. We will forget that turkey burgers are in fact made out of turkey. I walked off so they would hopefully decide to go elsewhere but they all took off the fur coats and decided to make do with our lack of turkey. When they were finally ready to order, they called me over and began to order all at once. No taking turns for these gals, nope. Just all say it at once and hope for the best. One lady wanted an omelette. With turkey in it. Hello?? We already went through this. Had the copious amount of make up that was plastered to her face somehow seeped into her brain and made her retarded? I reminded the dumb bitch of the turkey situation and she said to put a turkey burger in it. A well done one as opposed to the rare turkey burgers that I normally serve. Then the other lady asked for an omelette. With a steak in it. For real. And another lady wanted hash browns with onions inside it. “Well the hash browns are already prepared so I can’t add onions.” “You are telling me that you can’t add onions to a hash brown?” That is exactly what I was telling her. Another lady ordered a side of over easy eggs with cheese on top. She practically had a baby cow when I told her we did not have American cheese. They had a waffle for the table but not with the berries that usually come with it of course. Bananas. And bottled waters. With straws. And sides of bacon. Crispy. Their bill was $81 which is a lot for four people in my cheap ass diner. They tipped me $5.00. Now remember I have to tip out 5% of my sales to other people. That is $4.05 that I give to someone else leaving me with a grand total of 95 cents for that awful table. Again, you have to be able to tip. In light of the economy, I hate those four ugly tacky bitches.
CLICK HERE IF YOU LIKE THIS BLOG