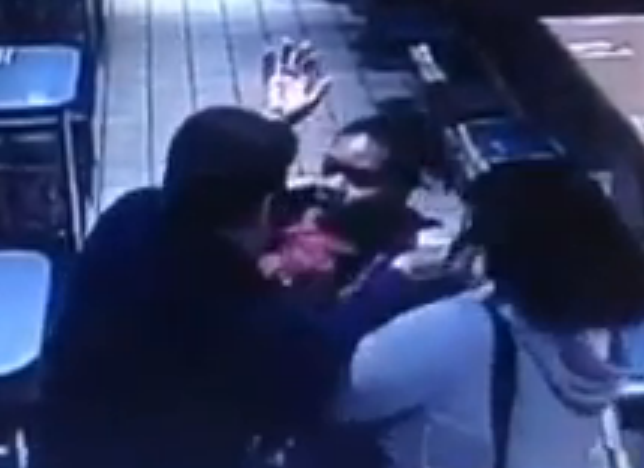 In an effort for customers to keep it classy, the classiest of all classy bitches was caught on videotape being as classy as classy gets. According to DNAinfo, a woman in New York City did not appreciate being asked to be quiet on her cell phone when she waltzed her ass into a Flatiron District diner and and yelled on her cell phone for thirty minutes without ordering any food. When the manager asked her to shut the fuck up, Classy Bitch went ballistic and started trashing the place.

Latima Brown was out with a friend late one night and went into Malibu Diner at 5:10 AM. Nothing good can ever happen in a diner at 5:10 AM, right? She spit on the manager and then started grabbing anything and everything that could be thrown his way, including a glass of water, sugar caddies and a few ketchup bottles. Latima’s friend can be seen in the video trying to calm her the fuck down, but Latima is having none of it. She has a desperate need to see a ketchup bottle make contact with something. And she does. She is eventually forced out of the restaurant and is caught by the cops moments later. Latima was charged with assault and criminal mischief and was released, which means if you see some grumpy looking bitch coming into your restaurant at 5:10 in the morning, hide your wife, hide your kids and hide your ketchup bottles.

Of course, I wasn’t there, but I work right around the corner from the diner, so that gives me the right to imagine what Latima was experiencing that night caused her such anguish:

Latima and her friend Fantine had just left a late night White Elephant Party. A White Elephant Party, as defined by Wikipedia, is as follows: “each participant supplies one wrapped gift. The gifts are placed in a central location, and participants determine in what order they will take turns selecting them. The first person opens a wrapped gift and the turn ends. On subsequent turns, each person can open a new present or gets the choice to “steal” another person’s unwrapped gift. When a person’s gift is stolen, that person chooses another wrapped gift to open. The game is over when the last person has taken their turn.” Those parties can be really fun, but if you get stuck with a crappy present, it can be areal bummer. Latima was the loser at the party. She was the second to the last person to open a gift and she was surprised and delighted to find a brand new FryDaddy®.

“I want this FryDaddy®, so don’t anybody think you’re taking it,” she said. “I have been craving some fried hot dogs all week and I will fuck you up if you take this mother fuckin’ FryDaddy®, you hear me?”

There was only one person left to play the game and it was Fatima’s arch enemy, Blair. Blair and Latima had gone to high school together and had never gotten along. Blair was prom queen, homecoming queen, valedictorian, most likely to succeed and the drum major. Fatima was none of those things but was voted Blow Job Queen in an informal poll that took place on the wall of the third floor boys’ restroom.

Blair had to choose between the last unopened present or the any present that had been already open. Her eyes fell upon the FryDaddy® that Fatima had already put inside her huge purse. Blair remembered back in high school how one day Fatima had taken the last hot dog in the cafeteria. Blair was before Fatima in line, but Fatima had reached in front of her and grabbed the last one forcing Blair to eat potato chips for lunch that day. Fatima loves her some hot dogs, fried or otherwise. This was Blair’s chance to pay that thieving hot dog bitch back.

“Ummm, okay…I think I want to steal a present that’s already been opened.”

Fatima clutched her purse tightly. “You better be stealing something other than my FryDaddy®, bitch,” she said.

“Well, I really really hate to do this, but…I want… the… FryDaddy®!” She walked over to Fatima and yanked the FryDaddy® from her purse. “You can open the last present, Fatima. Who knows? Maybe it’s another FryDaddy®.”

Fatima was pissed, but Fantine helped calm her down by handing her the last unopened present. Fatima slowly pulled the wrapping paper from the box. The whole room was on the edge of their seat because whatever Fatima got was hers to keep. There is no trading when you’re the last one at a White Elephant Party.

“This better be another mother fucking FryDaddy®!” she said.

She opened the box to reveal her gift: a candle holder that had been made from an old ketchup bottle that had been covered with papier-mâché and dripping candle wax of all different colors.

“Awww, hell no, that ain’t right. That ain’t fucking right. This bitch gets a FryDaddy® and all I get is a shitty ass mother fuckin’ ketchup bottle that some bitch tried to make fancy in a fucking art class in the 7th grade? This is bullshit. Bull. Shit.”

Fast forward two hours later and Fatima is at Malibu Diner still upset and yelling into the phone to her sister about her horrible night. She has every right to be angry. Blair practically stole that FryDaddy® from her. She was so upset that she yelled to her sister for thirty minutes. It is this moment when the manger calmly asked her to please quite down. The rest is caught on tape and now you understand why she was mad enough to throw ketchup bottles at a wall.