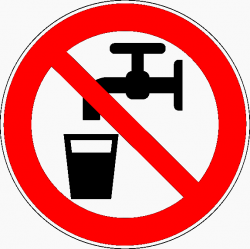 No tap water for you.

It has been said that I am a bitch. It has also been said that I like to stir the pot, poke at a hornet’s nest and push buttons for the sake of pushing buttons. One thing I did not know about myself is that I have been an immoral, law-breaking hooligan who commits crime after crime almost every single day. It’s amazing that I have not been arrested and had the book thrown at me. It turns out that in New York City there is a decades-old law that has been on the books that makes it illegal to serve tap water to a customer in a restaurant unless they specifically ask for it. The law was repealed and the notice of the new rule went into the City Record on January 23rd and it will go into effect 30 days later. This means two things. It means that every day for the last twenty years when I approached a table with a pitcher of water and filled up glasses, I was breaking the law. It also means that I have until February 22nd to uphold this law because there is nothing I want to do more than uphold laws except uphold a martini glass right up to my lips.

From now until February 22nd, there will be no water served in my station unless I hear my customer specifically say, “Excuse me, but may I have a glass of tap water?” I will be a law-abiding waiter.

I cannot believe that I have been breaking this law for so many years. Why didn’t anyone tell me that I did not have to be giving water to people? I could have saved myself so much time and effort! What about that guy who is a Hefty bag of douche who drinks ten glasses of water at every meal? There I was, just constantly refilling his glass over and over again because I thought I was being a good waiter when all I was really doing was being a criminal? I feel awful about it. A few years ago, there was a drought here in New York City and we were told that we could only give water to those who asked for it, which is weird now, because that’s what the law was anyway. But I loved it.

“Excuse me,” said a bitch with major resting bitch face. “But you didn’t bring our table any water. Were you planning on doing that any time soon?”

“Actually, ma’am, I wasn’t,” I replied. “City ordinances state that because of our drought emergency, we are only allowed to pour water for those who ask for it and you didn’t ask for it, bitch with major resting bitch face.”

It was very empowering. And so it shall continue to be, at least until February 22nd. I can’t wait to go to work tonight and not have to fill up water pitchers. When my manager asks why I have not done that portion of the opening sidework, I will shout out, “Because it’s the law, that’s why!” In my head, I will be thinking, “Because I’m a lazy bitch, that’s why!” It will also be the perfect opportunity to up-sell my ass off and push the bottled waters. Why even ask customers if they want bottled water or not? Serving tap water is practically illegal, so I see that I will become very familiar with the Aqua Panna and Pelligrino buttons on the computer over the next three weeks. Tap water be damned! If you wait tables in New York City, I urge you to please follow the law. Do not pour water for your customers! Doing so only means that you are contributing to the universal unraveling of our moral fabric by disobeying laws that are meant to protect and help us. For the love of all things legal, do not pour water for your guests unless they ask for it. By not serving water, not only will you be contributing to a better law-abiding society, but you will also have more time to do other important tasks like play your turn on Words With Friends, update your Instagram account or text your boyfriend to see what kind of cocktail you will be having when you get home that night.

5 thoughts on “I Have Been Breaking the Law for 20 Years, Have You?”