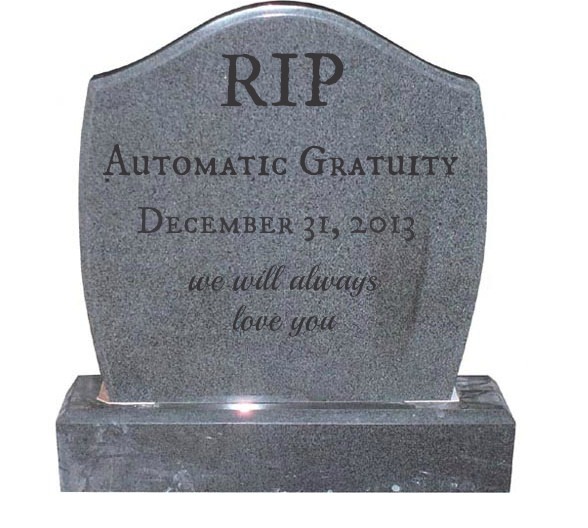 Today is a sad day for many of us in the restaurant world. If I didn’t like my hair so much, I would have pulled it out when I heard about the new IRS rules that are going into effect on January 1, 2014. A lot of you aren’t going to like it. You know that automatic gratuity that we all love so much? You know the one. The one that’s usually 18-20% and it gets added to a party of six or more? Well, kiss it goodbye because it’s as done as a bottle of Absolute Citron in my apartment. So many people have written and asked me for my thoughts on this and I have hesitated to respond because it involves a lot of legal mumbo jumbo that I don’t want to misinterpret. For a much clearer explanation of the new law, click here to a real website written by hotel lawyers who probably don’t type with two fingers like I do. Jim Butler and Travis Gemoets know what they’re talking about, but please allow me to give you my condensed version.

Automatic gratuities are going to be classified as wages instead of tips which means that restaurant owners are going to have to do a lot more paperwork to keep track of these “service charges” and will have to withhold taxes and report them to the IRS. If your restaurant owner is anything like every one I have ever known, they are going to be like, “Aww, fuck that shit. Just scratch out that line on the bottom of the menu about adding the tip and let the waiter take his fucking chances.”

Prepare to be screwed, fellow servers. That automatic gratuity was there for a fucking reason. Contrary to what many people believe, it wasn’t there just so the waiter could give half-assed service knowing he had a set 20% tip. (I know a lot of servers do that and if you’re one of them, you suck.) The added gratuity was there to protect the server from spending his whole evening on one party of 15 that is celebrating Grandma’s 90th birthday, but Grandma thinks that a shiny quarter is still a good tip. At most places, we pay taxes based on our sales, so the added tip was there to make sure we were getting at least what the government expects us to receive. Also, if you have to tip out to support staff and that tip is based on sales, then that added tip was there to ensure that we weren’t losing money by waiting on some cheap ass party of ten. Say a ten-top has a bill of $200 and you have to tip out 4% of it to various people. That means that you owe $8 before a tip has even been calculated. The table should tip at least 15%, or $30, leaving you with $22 for yourself. If they only leave 10% you still owe $8 to the busser, food runner, bar, etc. But what if they don’t leave you anything? You will still owe $8 meaning you just paid money to wait on someone.

Restaurant owners don’t want any hassle so it’s going to be the servers who will suffer the most from this. Gone are the days when a server was happy to have a large party seated in his section. Seeing a group of ten women having a baby shower at Chili’s is never a comforting sight but at least you knew you would get to auto-grat them. Now, you’re gonna be lucky if a table like that leaves you with anything more than a bunch of wrapping paper, empty iced tea glasses and the smell of Jaclyn Smith perfume. Who knows? Maybe restaurants will still allow us to add the gratuity and they will happily fold it into our wages and claim the taxes for us and make sure that we are all happy to be at work. I’m sure they will do that right after they start paying for the uniforms they require us to wear, giving us the breaks that we are legally entitled to during a 10-hour double and offering us paid vacation and health benefits. Wait, what was that I just saw? I think it was a unicorn flying out my butt while singing “It’s Today” from Mame.

Good luck, servers. It looks like 2014 is going to take a bite out of our asses. 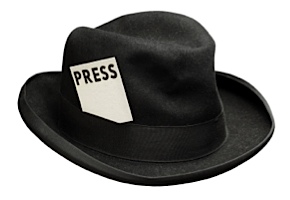