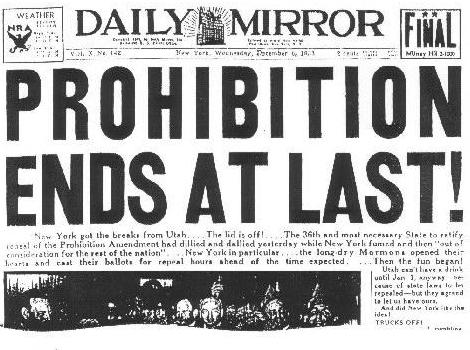 It’s a very important day in our country and one that is too often ignored. On this day in 1933, the government came to their senses and realized that they had made a horrible mistake thirteen years earlier by prohibiting the sale and distribution of alcohol. On this day, eighty years ago, Prohibition was repealed with the passing of the Twenty-First Amendment and people could go back to drinking Bloody Mary’s, Bahama Mamas and Cosmos. It’s kinda like my favorite day ever.

I was at dinner last night with a group of nine people who were invited to break bread with one of the higher-ups in the company I work for. Apparently, every other employee had a commitment and they got to the bottom of the barrel for employees to invite to the dinner and they scraped me up. So, there I am sitting next to the vice-president (or some shit…) of a multi-million dollar company and trying to think of things to talk about other than sidework and the lady who has yet to come back and pay her check from three weeks ago. We finally found common ground when the conversation turned to the Real Housewives of Wherever the Fuck. I was watching my language but my biggest fear of last night was that I would choke on my food and embarrass myself by having to have a waiter Heimlich me. When I was a senior in high school, I was a class officer and went to fancy dinner at Siesta Mexican Restaurant in Victoria, Texas. Sitting next to me was our principal who was also the mayor of the city. About halfway through the meal, I swallowed wrong and my food “went down the wrong pipe” and I ended up choking and gagging for air. I was mortified. Ever since then, I have had some kind of weird throat/gag reflex thing that sometimes makes me choke for no reason and I did not want it to happen last night while I was on my best behavior. I did not choke, but guess who did: the higher up vice-president lady. She choked on a piece of bread and was coughing and gagging. I could see that she was able to breathe so it wasn’t like I needed to help her, but in my head all I was thinking, “at least it ain’t me.” After that settled down, I saw my boss order a second glass of wine which was my cue to order a third.

When our drinks came out,a toast was made. It was too good friends, making new connections, relationships, a prosperous 2014, etc. As glasses were clinking and I was drinking, someone explained to me the origin of clinking glasses and I found it quite interesting.

Legend has it that people began clinking glasses when there was an intense fear of being poisoned. By clinking a glass and letting some of each drink spill into the other glass, you were letting that person know that you were not trying to poison them. For a second I wondered why my boss didn’t actually let his glass touch mine and thought he might be trying to poison me but then I figured he knew I was an impatient bitch and didn’t have any time to wait for no stinking clink before pouring the wine down my throat. Since someone was sharing interesting facts about drinking, I decided to remind everyone about the importance of December 5th.

“Well, you know that tomorrow is the 80th anniversary of being able to legally drink in this country, right? Woo hoo! Thank god they did away with Prohibition. I mean, what would be doing right now if liquor wasn’t legal? If I didn’t have two glasses of wine in me, I don’t know what the fuck I would be talking about right now, you know?”

I took a deep swig of my wine, giving thanks to the Twenty-First Amendment and when I looked around at the table, I saw a lot of polite stares that were telling me to shut the fuck up. So, I did.

But, I would like to propose a toast: thank you to the lawmakers who realized that alcohol was invented for a reason, the reason being to drink it. Thank you to those who wrote that amendment and gave us back the delicious nectar that so many of us end our day with and that some of us start it with. Happy anniversary, Twenty-First Amendment. You’re right up there in my top three favorite amendments ever.