So I went to the second interview for the big corporate restaurant yesterday. It was scheduled for 3:00 but I was at another restaurant at 2:40 waiting to meet with a manager and getting a little nervous. I finally had to bail and literally run to catch a bus and then run three blocks to make it to my interview on time. Believe it or not, punctuality is hugely important to me and to show up late for an interview is just showing a bad first impression. I made it at 2:59. Mr. Fancy “I Wear a Suit to Work” Manager came to meet me at 3:35. Nice. He asked me all the same questions that the other guy in Chef’s Whites asked me last week. I wanted him to notice that I had cut three inches off my hair to show how serious I am about my future with their company, but he never did. And voicing it just seemed to fucking desperate. Even for me.

I asked them some questions and got some startling answers. At peak they have twelve servers on the floor. Twelve! I looked around the restaurant. “How many tables do you have in here?” I asked. He told me that each person has a three table section. At my last job I had the whole place to myself sometimes and had up to 12 or 15 tables at once. What do you do with three tables? hover? Chew their food for them? Wipe their mouths and their asses? Jeez. He told me that sales for a dinner can range from $1000 to $2000 and a slow lunch could be $500. That’s not vague or anything. I also asked about the tip out situation. Not too shabby. You only have to tip out 3% of sales and I was really surprised that it was that low. (I worked for a corporate place once that shall remain nameless [Rosa Mexicana] and we had to tip out 40% of our tips. We were supposed to tip the food runner, the bar, the busser, the guacamole maker and the fucking coffee girl. Even if you didn’t use coffee. They told me that on day two of training. There was no day three of training.) I fed Mr. Manager some bullshit about how long I have been a waiter and that they wouldn’t have to train me to be one. They just have to tell me what steps of service they require for their restaurant. When I told him I had been waiting tables for almost 18 years, I could see the realization on his face that I had been serving food since he was in the fifth grade. That made me cry a little on the inside.

Finally, he told me he would discuss my application with the other managers and decide if they wanted to bring me in for a third interview. A third? I’m sorry, did I accidentally apply for the position of brain surgeon because I thought I was just asking people what food they wanted and then carrying a plate to a table. 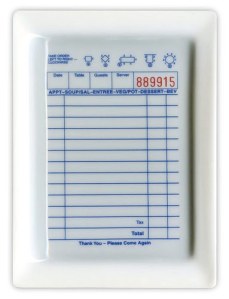