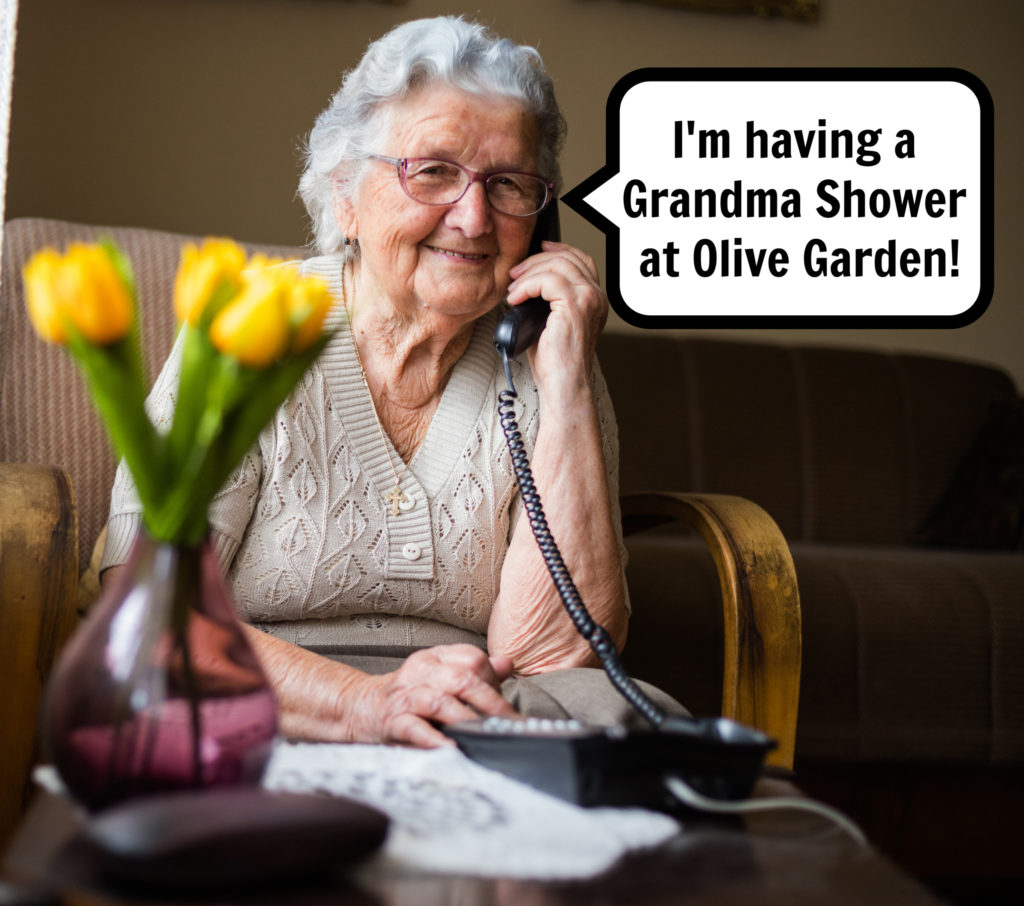 Most of us who work in restaurants have had the extreme pleasure of serving for a baby shower. Baby showers usually happen in the home of the mom-to-be or one of her friend’s, but on occasion, it ends up happening in a restaurant because no one is willing to have a gaggle of women invade their living room so they can play “the candy bar in the diaper” game and serve lame ass mock-tails like Virgin Peach Bellinis and Mother’s Milkshakes. When these unfortunate events do take place in a restaurant, the server is left with a pile of wrapping paper, plastic trinkets that fell out of the goody bag and a measly tip. Well, prepare yourselves, because it has come to my attention that there is now something called a Grandma Shower.

At first, I assumed this was similar to a Baby Shower where women would gather to bring gifts to the future Grandma so she is prepared for her new role. You know, things like bags of caramels and those horrible strawberry candies.

Or maybe extra Kleenex that she can stuff up her sleeve for snot emergencies and probably a sweatshirt that says “If Mom Says No, Go Ask Grandma.” Instead of the partygoers cutting a ribbon to guess the girth of a pregnant belly, they would cut one to guess the size of a swollen cankle. But then I had a realization that a Grandma Shower might not be at all what I first assumed it was.

Picture this: A Grandma decides to have a party at Olive Garden, but not just any Olive Garden like that skanky one out by the mall next door to Outback, but the the nice Olive Garden that’s across town near the Super Target.

“Yes, I’d like to make a reservation for fifteen people. I’d like a table toward the back of the restaurant if possible,” Grandma says to the hostess. “And I would suggest you place a sheet of plastic on the carpet if you can.”

“Oh?” asked the hostess. “Will there be a lot of children in this party? Do you need highchairs?”

“No, no children, but it might get a little messy. And I’m gonna need at least ten carafes of water too. I want my guests to stay hydrated. Bye bye, dear.”

Two days later, Grandma shows up to Olive Garden, eager with anticipation for her Grandma Shower. She is disappointed to discover there is not plastic sheet on the carpet. “Oh, well,” she thinks to herself. “You can’t say I didn’t warn them.” She eyes the carafes of water and her skin tingles with excitement at the possibilities if all that liquid.

Moments later, her guests begin to arrive. Most of them are older gentlemen with gray hair and paunchy bellies, one with a walker and two with canes. There is one man who is about 25 years old who saw an ad for this Grandma Shower on craigslist and decided to give it a go. Also in the mix are two women dressed in black leather and holding whips. Grandma can tell this is going to be the best Grandma Shower she has ever hosted. They all find themselves a seat at the table.

“Wow, no plastic sheet,” says a man with a droopy eye and a colostomy bag. Nice.”

In walks their server. “Hi, my name is Alyssa and I’ll be taking care of you today. Can I start anyone off with something to drink?”

“I’ve already set your table with water for everyone-oh… “ she trails off as she notices that all fifteen glasses are already empty. “I’ll refill all your glasses in just a minute. And is anyone in the mood for a never-ending salad?” she asks.

Grandma, sitting at the head of the table laughs. “Oh, there’s about to be plenty of tossed salad, but we don’t need it from the kitchen, dear.” Everyone laughs. “Just bring us some breadsticks for now. And then five orders of Giant Cheese Stuffed Shells, ten orders of Stuffed Ziti Fritta and one Spaghetti and Meatballs, hold the spaghetti but with extra balls.” More laughter.

Alyssa steps out of the room, excited about the automatic gratuity that will be added to the check.

Grandma stands up to greet her guests, arms extended and chin help high. “Welcome to my Grandma Shower. I see you’ve already downed your first glass of water, so well done, my friends, well done.” She gestures to the carafes of water sitting on another table against the wall. “Please, fill yourself up as needed.”

The man with the colostomy bag lifts it high over his head indicating it’s already full.

She gently lowers herself to the ground, careful to not injure her hip, as the men and women gather around her in a circle, walkers and canes included. One by one, the men begin to unzip their pants readying themselves to release fresh streams of warm urine upon their hostess.

Alyssa walks back into the room holding a large oval tray full of warm breadsticks. “Oh my god, what the heck is happening here?” she cries out.

Grandma, lying on her back  with the colostomy bag nestled between her naked breasts, looks over at her. “It’s a Grandma Shower, dear, I told you to lay a plastic sheet down, didn’t I?”

5 thoughts on “Grandma Showers Are a Thing Now”