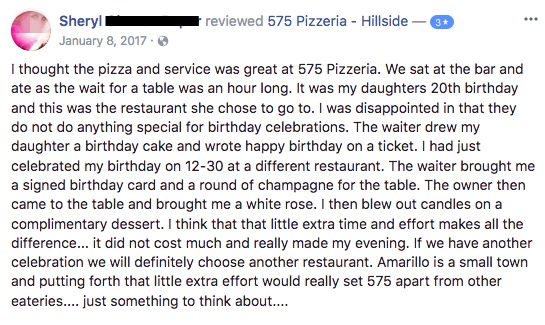 Very often, I have gone after 1-star reviews when I think the reason for the negative review is a stupid one. Today, I am veering off course a bit and putting my focus toward a 3-star review. It’s still a stupid review, but since it’s for three stars and not just one, I will go a bit easier on the writer, Sheryl.

It seems that Sheryl took her 20-year-old daughter out for her birthday to a restaurant called 575 Pizzeria. She thought the “pizza and the service was great,” but Sheryl couldn’t find it in her heart to award them with five stars because she felt the staff didn’t do enough to celebrate the anniversary of the day her daughter climbed out of her vagina.

“The waiter drew my daughter a birthday cake and wrote happy birthday on a ticket.”

You see, that wasn’t enough for Sheryl because Sheryl had recently been to a different restaurant to celebrate the day she climbed out of a vagina and that restaurant did it right. “The waiter brought me a signed birthday card and a round of champagne for the table. The owner then came to the table and brought me a white rose. I then blew out candles on a complimentary dessert.”

I have two questions for Sheryl:

I suppose the reason Sheryl gave Pizzeria 575 this particular review was because she wants them to step it up a bit. It’s food for thought, if you will, and can only make Amarillo, Texas better. However, if the pizza and service was great, doesn’t it make more sense to base the star rating on what they did for you rather than what they didn’t? Hell, if we are going to give reviews based on what we didn’t get, every review would be a bad one.

The more I thought about this review, the more I wanted to know about the restaurant that treated Sheryl so wonderfully and I also wondered if she took the time to give that restaurant a 5-star review. I did a little digging (no, I didn’t) and found out the name of the restaurant she was referring to (I totally didn’t do this) and reached out to the owner for an interview (again, this is not true). The owner was very willing to speak with me about what they do for birthdays and, in fact, he gave me a video interview which I have for you here:

If you want to know more about Billy Bob’s Diner, you can click here. And Sheryl, I would suggest the next time you want a bunch of free shit for your birthday, you go back to Billy Bob’s because it’s not responsibility of every restaurant to shower you with free things simply because you climbed out of a vagina.

7 thoughts on “Woman Expects Free Stuff For Her Birthday”