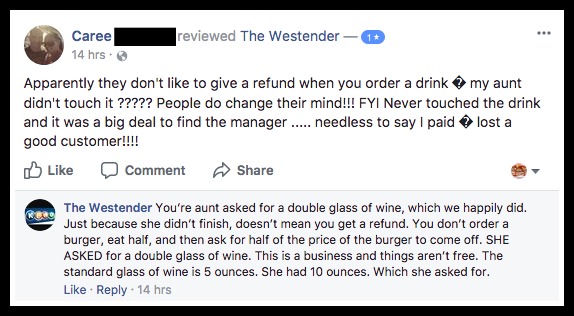 It seems like only last week that I was making fun of a stupid 1-star review, yet here we are again. (Full disclosure: I did this last week, but it’ so much damn fun that I’m doing it again.)

A woman named Caree took her aunt to dinner at The Westender in Marlborough, Massachusetts and things did not go well. The aunt ordered a drink and then changed her mind and Caree wanted a refund since her aunt “never touched it.” It sounds rather reasonable, but it depends on the circumstances. tIf the aunt changed her mind before the drink was made, sure, no problem. But if the aunt changed her mind after the drink was brought to the table, then we have an issue. It matters not that she “never touched” it because the restaurant can’t be expected to pour the liquor back into the bottle.

But then the restaurant tells their side of the story and it makes complete and total sense why there was no refund given. The aunt asked for a double glass of wine and it appears that the restaurant poured ten ounces of wine instead of the normal five ounces into one glass. The aunt drank half of it and then wanted a refund for what she didn’t drink.

No, Aunt Cray Cray, that’s not how it works. If the restaurant poured it all into one glass, they don’t want your leftover backwash cabernet to pour back into the bottle. For every sip you took, your old lady lips kissed the cabernet and it went back into the glass. Just like your nieces and nephews, nobody wants a cabernet kiss from you. Even if the bartender poured the wine into two glasses and you decided you only wanted one, they can’t reuse what you didn’t drink. It’s against health codes to reuse food and drinks that have already been served to a table because the restaurant can’t be responsible for what you may have done to that food and drink while it was in your possession. You could have sneezed on it or dropped a booger in it or accidentally placed your dentures into it. You ordered two glasses of wine, you pay for two glasses of wine. It’s not like the wine went bad during the course of your meal.

And for future reference, Aunt Cray Cray and Caree, the same thing goes for food. If you order a bowl of soup, you can’t eat half of it and expect a 50% refund. You can’t order a salad and not eat the carrots and then ask for the cost of the carrots to be deducted from your bill. And finally, you can’t go to Olive Garden and eat the never-ending pasta bowl until you throw it up into a bucket and then give your server the bucket and ask for your money back since you’re leaving with an empty stomach. That’s not how it works.

Caree, I urge you to remove this ridiculous review. It’s only making you look foolish and you aunt look worse. (I’m referring to the review written after yours that mentions a woman haggling about the cost of glass of wine while her aunt shits in her pants. That’s you, right Caree? Did your aunt really leave poop all over the floor? All this over the cost of a glass of wine? Is it really worth it? I didn’t think so.) Maybe if you take down your review, Alex will take down his. Fair is fair. Wine is wine. Poop is poop.