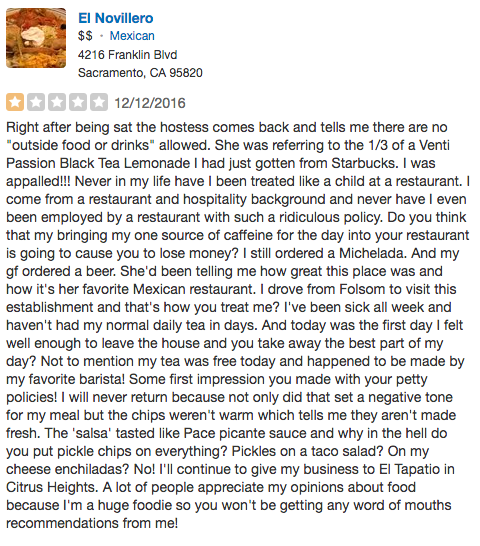 Forgive me for doing another post about a stupid 1-star review, but they give me such joy that I simply could not let this review from Ashley pass me by. It appears she gave one star to a seemingly popular and well-liked Mexican restaurant in Sacramento called El Novillero. She did not like their “petty policy” of not allowing outside food and beverages into the restaurant. Ashley, who claims she comes from a restaurant and hospitality background, has never experienced such a “ridiculous policy.”

Sorry, girl. That’s pretty standard. Typically, restaurants are not going to want you to carry in your own food and drinks. If you have never heard of that before, I question where you go eat. Wait, are you one of those people who take your kids to restaurants and then pull a fucking Happy Meal out of your purse? Yeah, we hate you.

Long story short: The restaurant didn’t want Ashley to come in with her Venti Passion Black Tea Lemonade. She had been sick for a week and it was the first time she had her “normal daily tea” in days, which is the “best part” of her day. (Life hack: if the best part of your day is a freaking tea from Starbucks, aim higher.) Adding insult to injury, the tea was made by her favorite barista and it was given to her for free! And then El Novillero had to come along and dump all over her by letting her know that they don’t allow outside food and beverages.

Needless to say, Ashley is never going back. Not only was she upset by not being allowed to drink the most hipster beverage I have ever heard of, she also disliked the salsa, comparing it to Pace, like that’s a bad thing.

The final straw that broke this insufferable camel’s back was that the tortilla chips were not warm! To Ashley, this tells her that they were not made fresh. Does she think that Mexican restaurants pull chips from the fryer seconds before going to the table? That’s not how it works. I have worked in a Mexican restaurant and the chips were made early in the morning before opening. Otherwise, the fryer would be full of tortilla chips all day and there would never be a chance to make anything else. Them not being warm does not mean they aren’t fresh, Ashley. It more than likely means they were not in a warmer.

Looking at Ashley’s profile, she loves to review on Yelp. In fact, she has 90 of them! You know she is dreaming of the day she becomes a member of Yelp Elite so she can have business cards made stating how very important she is. I also notice that out of the 90 reviews, 26 of them are 5-star while 27 of them are 1-star. This tells me that Ashley may be the problem more often than the establishment itself. 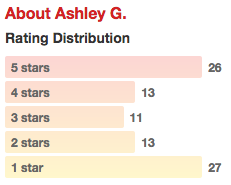 Sadly for El Novillero, they won’t be getting any “word of mouths” from Ashley and with her being a “huge foodie,” that could potentially be devastating to their future business. At least that’s what Ashley thinks. Anyone with half of a brain will read her review and have this response:

74 thoughts on “Another 1-Star Review To Shred”