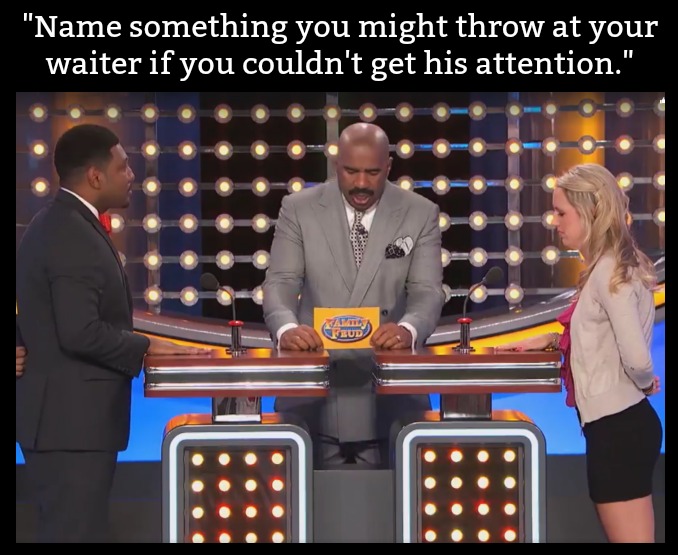 Family Feud done pissed me off. When I first saw this video, I thought it was a joke. After all, would someone at a major production company producing an iconic TV game show think this was an appropriate poll?

Name something you might throw at a waiter if you couldn’t get his attention.

Ummm, excuse me? Did they just survey 100 fucking people to see what they thought would be good to THROW at their server because they couldn’t get his attention? Yes. Yes, they did. The only correct answer to that poll didn’t even make it to the top eight answers. (The correct answer: NOTHING, because that’s rude as fuck.) But sure enough, there was Steve Fucking Harvey asking the question to the Holt family and the Bailey family and Kenny and Kelsey were ready with some answers. Apparently, they didn’t have to think too hard about it which makes me hope neither one of them ever shows up in my section. Kenny got the number one answer: a napkin!Kenny Holt thinks it’s fine to throw a napkins at his waiter.

Then we learn that Patrick Holt thinks it’s alright to throw a fork, Brian Holt thinks it’s okay to throw food and Dwayne Holt thinks it’s suitable to throw a cup. Really, Holt family? Where the fuck do you eat? Mike Holt earns them their first strike by suggesting he throws his shoe at the waiter. Yep, Mike wants to reach down, pull off one of his size 10 Hush Puppies and throw it at his waiter. Kenny gets the second strike when he wants to throw ice and they get their final strike when Patrick decides he’d just throw up his middle finger. Rude, but I’d rather someone shoot me the finger than hit me up against the side of my head with some ice or a shoe.

Now the Bailey family gets their chance to steal and they decide that the most logical item to throw at their waiter would be a salt or pepper shaker, because, why not? I mean, if it’s alright to throw a fork or a cup, why not the salt shaker? Surprisingly, that answer is not on the board, so the Holt family wins that round and boy are they excited.

We then learn that it is also okay to throw the menu, money, curse words or a stink eye. If I had to choose one of those, I guess it would be the stink eye because it won’t leave a bruise.

I hope that Family Feud does a new survey with the top seven things that a server can throw at a customer when they aren’t paying attention to us. (The top seven answers: sever pad, pen, coffee pot, bread basket, wine key, an open palm, and a fucking high chair.)

C’mon, Family Feud. Have some respect for us servers. You might think it’s a silly harmless question on a family TV game show, but for those of us who work in restaurants, it’s rude, disrespectful and it might even encourage some assholes to follow through on some of these piss poor suggestions. I’m really disappointed in you. I grew up watching this game show and my family even had the board game. Richard Dawson is rolling over in his grave right now with your lack of class and civility. 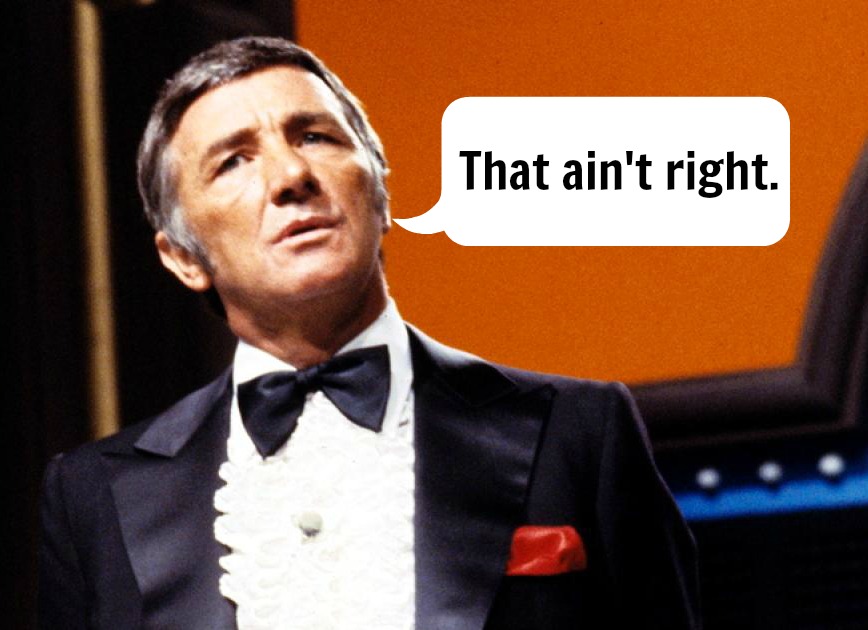 I urge you to go to the Facebook page of Family Feud and tell them how you feel about this segment that encourages violence against servers. Click here. Tell them Bitchy Waiter sent you.

You should also click here to go buy my book.