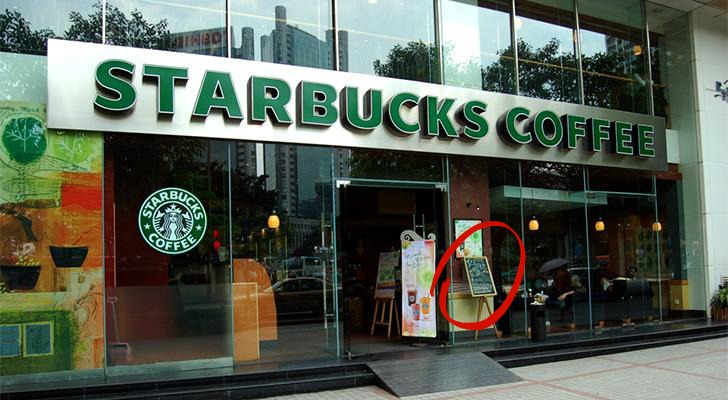 If only they would have changed their sign, this could have been avoided.

A Florida woman is $100,000 richer this week after a jury ordered Starbucks to pay up when she spilled some hot coffee on herself. You see, the to-go lid popped off the cup and the 190-degree coffee spilled onto her lap and burned her. So yeah, she gets paid for that. She was at drive-thru and she burned her lap, claiming the lid on her Venti “was either not attached properly or was defective.” Now I’m not a detective or anything, but here’s what I’m thinking:

If the burns were on her lap and not on her hands, could it be possible, seeing that she was at a drive-thru, that she nestled the scalding, dark-roasted deliciousness in between her legs as she drove away? And then, maybe getting somewhat excited at the thought of something large and warm between her creamy thighs, her adductor muscles tensed up causing the lid to fly off like like the cork from a bottle of champagne that hasn’t been touched in twenty years. As, the liquid gushed out in a torrent of rage, spilling all over her legs and torso, she moaned out, “Oh my God, my God! Stop it, please stop!”

Why the hell is that the fault of Starbucks? Who doesn’t know that to-go lids come off all the fucking time? That’s why you never hold to-go cups from the top, you don’t put them between your legs and you try not to squeeze the cup too hard. It’s a paper cup, not a metal thermos. Yes, the coffee was hot, but it wasn’t too hot. The ideal temperature for coffee is between 195-205°, so this coffee was right where it should be. Besides, if it was not hot enough, say only 165°, isn’t this the same woman who would turn her car around and complain to Starbucks that the coffee is “freezing?”

The woman suffered first and second-degree burns. While I don’t doubt that it hurt and I’m sorry that it happened to her, can’t she take some responsibility for herself? Starbucks is supposed to pay her $85,000 for pain and suffering, physical impairment, disfigurement, inconvenience and loss of capacity for enjoyment of life. I’m sorry, “loss of capacity for enjoyment of life?” That’s a thing we can sue for, because if it is, every restaurant I have ever worked in owes me some fucking money. She is also supposed to receive $15,000 for medical bills.

Starbucks may appeal the decision and they are standing behind the employees involved in the situation. I hope they do appeal and I hope they win. In the meantime, maybe Starbucks should put this sign up at every restaurant so they can protect themselves from this happening again: 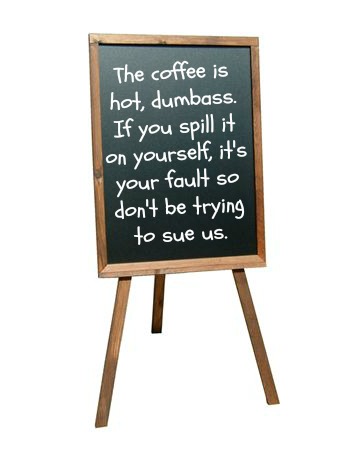 If they don’t appeal and this woman gets her money, you can catch me at my local Starbucks where I will be trying to decide which part of my skin I am willing to do without in exchange for $100,000.

9 thoughts on “Woman Earns $100K for Spilling Coffee on Herself”