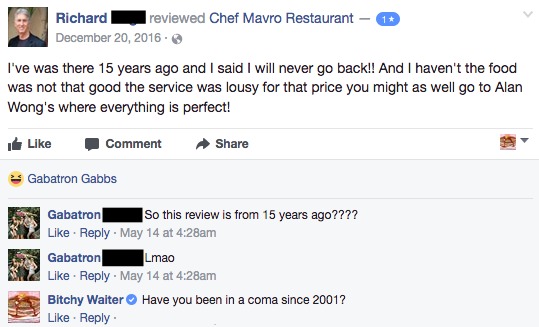 Once upon a time a long, long time ago in the year 2001, a man named Richard went to have dinner at Chef Marvo Restaurant in Hawaii. Richard was so excited to taste the delicacies of the South Pacific Islands and experience the tropical flavors as they roll around on his tongue and tickle his taste buds.

“This here’s goin’ be some good eatin’!” said Dick as he waltzed into Chef Marvo Restaurant. “I hope yall’s got pineapple pizza or something like that! It’s Hawaii! Wooo weeee!”

Sadly, Dick did not get his pineapple pizza. The menu offered such mundane items as foie gras parfait and Miyazaki wagyu; a far cry from the Hawaiian Punch-braised hamburger he was expecting. The restaurant didn’t even have a proper Piña Colada.

“Well, that shore was disappointin’,” he said as he headed to a Taco Bell to satisfy his hunger. “And expensive too! They didn’t even have a dollar menu!”

As Dick shoved MexiMelts and Soft Taco Supremes into his eating hole, he dreamed of a world where he could share his frustration to more than just his imaginary friend and bowl of bean dip. But you see, the Internet was but just a wee child in 2001 and platforms such as Yelp and Facebook were far into the future.

“Oh, well,” said Dick. And with that, he ordered a 59¢ Cinnamon Twist for dessert and moved on with his life. That is, until three days later when he went into a deep Rip Van Winkle kind of sleep after overloading on carbs and popcorn chicken from Popeye’s. Dick fell asleep for 15 years.

When he woke up in December of 2016, the first thing he did was take a massive dump and the second thing he did was create a Facebook account so he could finally leave a bad review of Chef Marvo Restaurant:

“I’ve was there 15 years ago and I said I will never go back!! And I haven’t the food was not that good and the service was lousy for that price you might as well go to Alan Wong’s where everything is perfect!”

Dick felt better that he finally got that off his chest. For fifteen years, he had literally been dreaming of this opportunity and now it finally has happened! He was surprised to learn that Chef Marvo Restaurant was still open after all these years. Apparently, they didn’t need Dick’s business to run a successful restaurant, but he still felt good about his 1-star review even though it was fifteen fucking years too late.