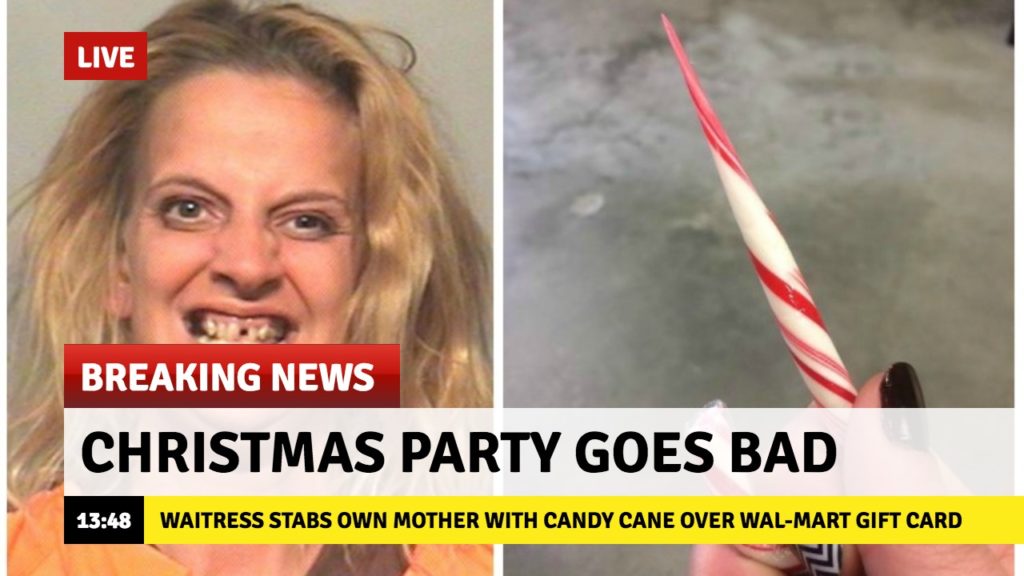 A holiday party in Dyersville, Iowa took a frightening turn when one employee shanked another employee with a candy cane that had been whittled down to a very dangerous weapon. Police were called to Kayla’s Kuntry Kitchen sometime late Sunday evening after the popular restaurant had closed early for its annual Christmas party. Waitress Heather Dipinsky, 24, was arrested on the scene while her co-worker, 43-year-old Darla Dipinsky was treated for minor injuries. The two women are mother and daughter.

Kayla Kuntablo, the owner of the restaurant, was shocked by what went down. “Them two have been at each other for a couple of weeks. It all started when Heather got in the weeds one night and her Mama went and covered her section for a bit. Well, Darla kept them tips from Heather’s tables and it just went downhill from there. They love each other but sometimes they just don’t like each other, you know?”

Co-workers say the feud had escalated earlier in the day when Darla spilled some hot chocolate onto her daughter’s lap, claiming it was an accident. Line cook, Robert “Bobby Boy” Reed says he saw it happen and it “certainly didn’t look like no accident.” He goes on to say, “Even if it was an accident, it doesn’t matter. Our hot chocolate machine sucks and it’s barely lukewarm anyway.”

After the eatery closed, the group had some egg nog and began playing the Dirty Santa gift exchange game where one person is entitled to “steal” a gift from someone else. Everyone had their eye on the $20 gift card from Wal-Mart that had been “stolen” several times already. When Darla opted to take it from her daughter, Heather produced the candy cane that she had been sucking on for 15 minutes, creating a “shank” and attempted to stab her mother in the leg. The wound was superficial. Heather was immediately subdued by a co-worker who knocked her to the ground with a ten pound bag of potatoes that some asshole was trying to pan off as a fucking Christmas present when everyone knew he had just gotten the potatoes from dry storage.

Police and paramedics arrived quickly seeing that local sheriff, Roscoe Coltrane happened to be next door having a beer. Darla was given a Dora the Explorer Band Aid and quickly went in for her fifth Solo cup of egg nog.  As Heather was put into handcuffs and the “weapon” was confiscated, her mother was quoted as saying, “I ain’t surprised she was able to get that candy cane into such a sharp point. She’s real good at sucking. Been doing it since seventh grade.”

The party continued and forty-five minutes later, Heather returned. The elder Dipinsky decided to not press charges and the two have since made up. However, they have decided to no longer work the same shifts; one will work the breakfast/lunch while the other will do dinners. No word on who ended up with the $20 gift card from Wal-Mart.