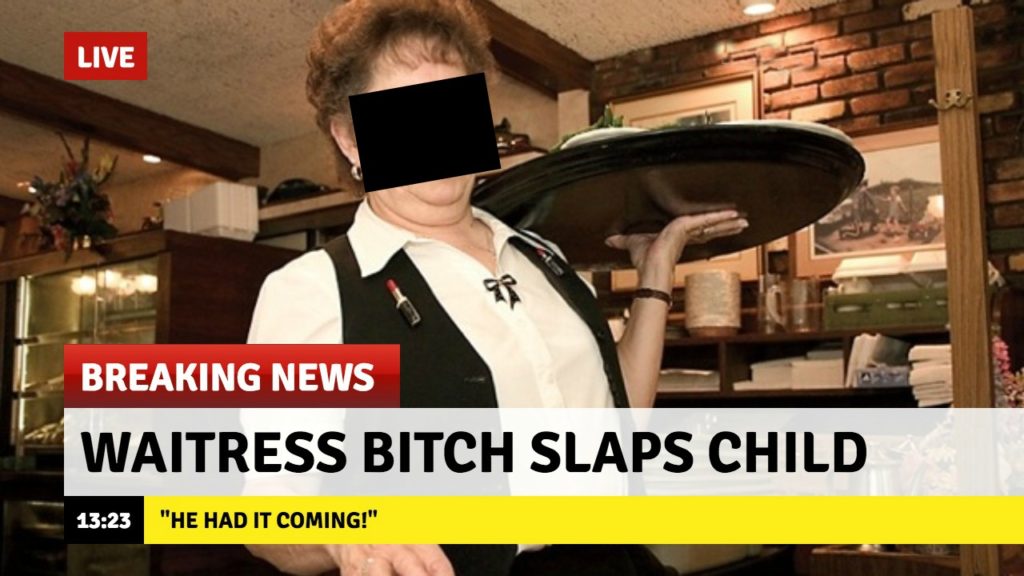 A 64-year old waitress, Veronica Peal, was in some hot water recently when she apparently “bitch slapped” a toddler who was eating in the restaurant she worked in. Peal has worked in MacGyver’s Pub of Bloomington, Indiana for over twenty years. Earlier this week, Mary and Todd Bobonner came into the restaurant with their 7-year old boy, Conner. The boy immediately demanded a grilled cheese sandwich. “He didn’t say ‘please’ or anything,” said Peal. “That really grinds my gears, you know? Parents these days don’t feel like they have to teach their children any manners.” Peal, brought the little boy the sandwich and again had her gears ground when there was no thank you. Mr. and Mrs. Bobonner, who were both busy looking at their iPhones, did not encourage their offspring to acknowledge the waitress who was just trying to do her job and maybe get a little bit of respect at the same time. “I brought out his sandwich first, but he was done eating it before the parents got their food. So as they ate, they let him run around the restaurant like a damn chicken with his head cut off,” says Peal.

Several other guests began to complain to Peal about the unruly child and the manager was even asked to intervene. When Conner climbed on a booth and sang the “Happy Birthday” song at the top of his lungs to his imaginary friend Turtle Lips, the veteran took matters into her own hands. “I marched right over to him and smacked his face and that shut him right up.”

This is when the parents finally got involved claiming “he was just being a kid.” They used their iPhones for something other than the Internet and promptly called the police. Officer Darrell Fingerhut arrived on the scene shortly and assessed the situation. After interviewing both the waitress and the parents, Fingerhut determined there were no charges to be pressed. Said Fingergut, “If the parents aren’t going to control their kids, then somebody else has to step up to do it. This waitress is a goddamn hero in my eyes.”

The Bobonners were escorted out of the restaurant to the loud cheers of several customers. Peal left with more tips than she has made all week. “I don’t feel bad about smacking him really. I just feel like kids need to learn some manners these days and if I’m the one to teach them then so be it.”

The identity of Veronica Peal has been obscured to protect her own bad assery. If everyone knew who she was, she would constantly be be harassed for finally doing what every server dreams about doing.

For the rest of the story, please click here.