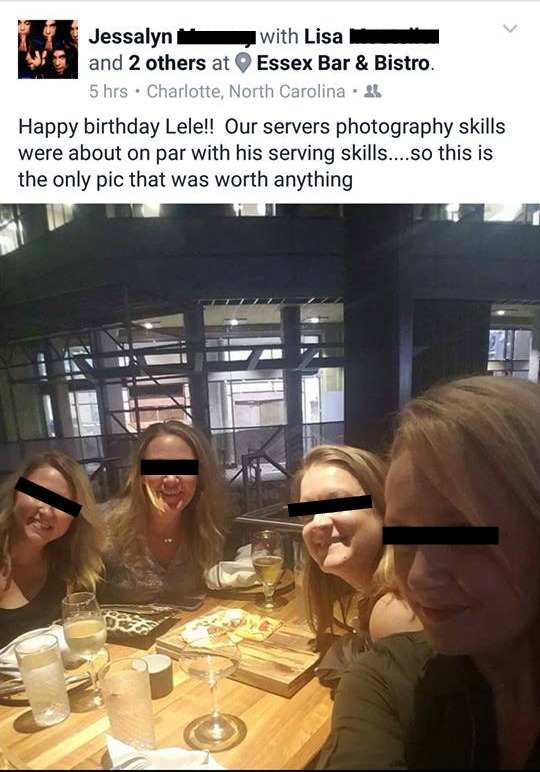 Ugh. Tonight I went to dinner at Essex Bar & Bistro with all my besties for Lele’s birthday and I swear to God, it was basically awful. I mean, the food was good and everything, but our waiter was like, totally lame. Like, we asked him to take a photo of us and he couldn’t even do that right. Like, oh my God, who can’t take a picture with an iPhone? How dumb do you have to be? By the way, my Daddy bought me the new iPhone 7 in Rose Gold and it is almost as beautiful as I am. Almost. Ha ha! The waiter wasn’t very good at his job which does not surprise me at all. Like, I asked for four lemon wedges and he just brought me a bowl of them and I counted only three. Umm, I asked for four! And then, when I told him I needed a gluten-free menu he told me they don’t have one. Dafuq? In this day and age, every restaurant should have a gluten-free menu. So then I asked him what I could eat there and he told me that it was my job to know what I could and couldn’t have if I was avoiding gluten. How rude! Anyways, I ordered the mushroom flatbread and it was so yummy. Since he couldn’t be bothered to give me a gluten-free menu, I hope that the crust didn’t have any wheat in it. If it did, welp, there goes my diet! Ha ha! I also ordered the Essex Ginger Berry cocktail, but asked for it with no ginger and instead of vodka I had tequila. And instead of a martini glass I asked for it in a regular glass. Frozen. With a sugar rim. He seemed all irritated with me, but whatever. Anyways, we asked him to take our picture like ten times. He always acted like he was so busy and couldn’t’ be bothered. He kept going to other tables and doing things for them like filling their water and carrying out their food and stuff like that there. Umm, hello?? If I’m tipping you 10% then you need to do what I say, alright? Finally, he took a picture of us and it was so bad. Like Lisa’s head was cut off and you couldn’t even see that I had just gotten my highlights done this week. We asked him to take another one and it sucked too. The lighting was bad. So we asked for another and this time Ashley had her eyes closed. So we asked him to take one more and he basically told us he was too busy. Welp, there goes his tip! So I was forced to take a selfie because I wanted to check in on Facebook. His photography skills were about on par with his serving skills. (That’s what I wrote on Facebook too. Sick burn, right?) Anyway, diary, I had a fun night. I just don’t understand why waiters aren’t required to take a photography class or something. It would be really helpful for people like me who lost their selfie stick. And waiters are supposed to be there to do stuff for us like wipe up the table when I spill my drink, sweep under the table when I drop my bread and take a picture of me when I need it. Happy birthday, Lele!! Sorry about the crappy photo of your special night. Waiters suck.

(This may or may not be an actual entry from her diary. We cannot be certain.)

14 thoughts on “Why Can’t My Waiter Be a Better Photographer?”