Home
/
Uncategorized
/
Complaining For the Sake of Complaining 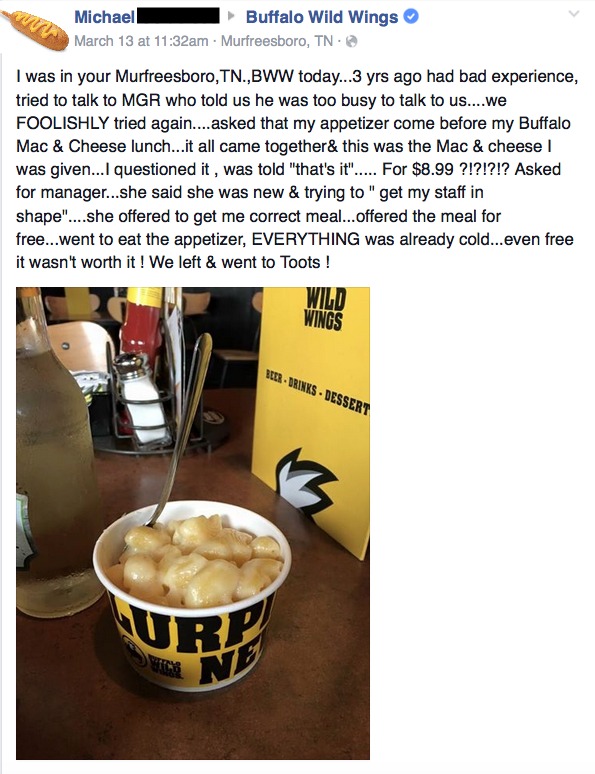 God bless Facebook. It provides us with the opportunity to connect with friends from around the world and it gives us amazing cat videos too. And as if that wasn’t enough, it also provides a safe haven for customers to complain about all kinds of wrongs that happened while they were dining out and that, in turn, creates a wonderful educational tool for me. I want to teach something now.

A man named Michael went to a Buffalo Wild Wings in Tennessee this week and had a less than perfect time. We know about this, because he complained about it on Facebook. He was also at the same restaurant three years before and is still harboring bad feelings about that experience because it resurfaced in his present day complaint. You see, Michael wanted his appetizer to come before the mac and cheese that he was having for lunch. No word on what he had as an app, but since he was having mac and cheese for lunch, my guess is that healthy eating is not a concern for Michael and he ordered mini corn dogs. Well, two things went very wrong this day at BWW’s: everything came out at once AND the mac and cheese was way too small for $8.99. I dunno, maybe they brought him a side instead of the meal. Of course he asked to speak to a manager even though three years ago a manager was too busy to talk to him.

I was in your Murfreesboro,TN.,BWW today…3 yrs ago had bad experience, tried to talk to MGR who told us he was too…

The manager told him that she was trying to get her staff in shape and offered to get him the correct order and also offered to comp the meal. When he was finally ready to eat his appetizer, it was already cold. Cue the dramatic music and the overreaction, because Michael could not take it!

If he had he not spent ten minutes whining about his food coming out too soon, his fucking mini corn dogs would probably still be hot. The manager already told him she was going to comp everything, but that wasn’t enough for Micheal. He still felt the need to go to the Facebook page and air put his grievances in much the same way he will need to air out his underwear after having a lunch of corn dogs and macaroni and cheese. “Even free, it was not worth it!” he says. (“Ummm, I’ll take the cold, free food,” said every homeless person in Tennessee.) He left the restaurant and went to Toots instead because, as everyone knows, if you want some good food and a real need to air out your underwear, you go to a restaurant called Toots.

And now the lesson I want to impart: do not complain if you don’t want someone to rectify the problem, otherwise, you’re just being a pain in the ass. If you complain about something at a restaurant and the manager is willing to fix the problem and give you the food for free, what else do you fucking want, a hug? Your Facebook page complaint makes you look foolish since you essentially said that the manager fixed the problem and you still aren’t happy. Complain with reason. Accept the apology and the solution. Say thank you. Eat your free fucking food and move on with your day. 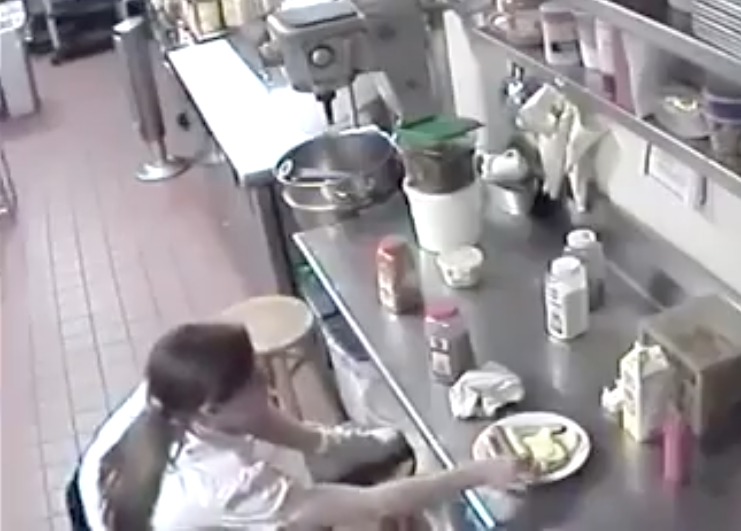