Home
/
Uncategorized
/
What Happens When You Spit Into Someone’s Food? 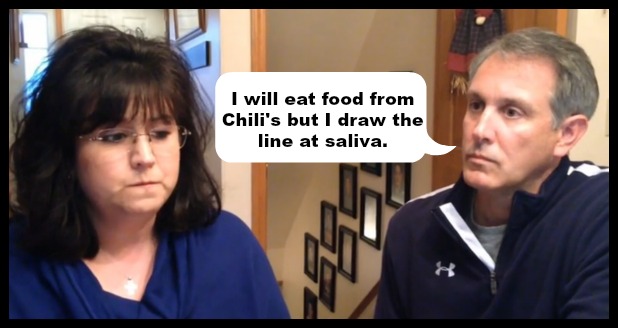 A Chili’s waiter in Clay, New York learned the hard way that spitting in someone’s drink is a stupid decision. According to news reports, Ken Yerdon and his wife Julie Aluzzo-Yerdon made their own bad decision to go to Chili’s once a week for dinner. Their server, Gregory Lamica, was not having it that day and when he got frustrated with them for asking for some chips that hadn’t been served and then complaining that the broccoli was undercooked, he reached down into his tortured soul and hocked up a loogie into their to-go cups. Obviously, the lid popped off and Ken and Julie could see the phlegm floating on the top which made them drive back to the Chili’s and complain.

All together now: Amateur! If you’re gonna spit into a drink, you should have stirred it up, asshole.

The manager on duty decided it was a good time for him to make a shitty decision too, so instead of firing the server, he simply comped their food and threw some coupons at them. “Hey, it works for Facebook complaints, “ he thought.

“We just felt like he needed to be terminated immediately,” Julie said. “To do something like that was so vile and beyond the pale. We couldn’t believe it.”

As hubby left with his pocket full of coupons, he saw the waiter in the parking lot crying like a baby.

“You wouldn’t be crying if you didn’t spit in my drink,” said the man.

“I don’t want to lose my job,” replied the server.

Actually, Gregory, you’re working at Chili’s. This could be a blessing in disguise.

Well, Mr. Yerdon wasn’t satisfied with a “Buy One Dessert Get a Second For Half Price” coupon so he called the state police because everyone knows that the state police love to help solve mysteries and crimes about some asshole server spitting into iced tea. The waiter was questioned, he denied spitting but agreed to a swab test for DNA testing. (This kid is an idiot, clearly. If you did it, just own up to it. It’s a fucking DNA test.) The DNA testing was ran because everyone knows that laboratories love to do fancy DNA tests on loogies. The result came back three months later and (say this in a Maury Povich voice) “Gregory Lamica, you ARE the father!” This is when Gregory confessed, because, hello, DNA testing. He was charged with disorderly conduct, sentenced to a one-year conditional discharge and a $125 surcharge.

The Yerdon’s are planning on suing Gregory and Chili’s for the psychological trauma they endured not knowing whether Mr. Yerdon had contracted HIV or hepatitis because he’d sipped from the cup twice before seeing the spit. Yeah, don’t bother Googling anything about HIV to discover that you can’t fucking catch it that way, just sue. And good luck suing a 24-year-old waiter who worked at Chili’s. If you win, maybe he’ll have to give you his collection of aprons and all three of his pens.

Let’s review, shall we? This whole thing is an exercise of bad decisions. First off, the Yerdon’s should have known that the broccoli tasting horrible is the way it always tastes at Chili’s. If they go there every week, that should have been understood. Secondly, if Gregory was really in a foul mood and was too lazy to stir his spit into the drink, he should have just stuck his dirty thumb into it and called it a day. Thirdly, the manager fucked up by not firing Gregory and should have just given Julie a lifetime supply of Cinnamon Skillet Rolls. We all know that’s what she really wanted. Lastly, the state trooper should have ignored that call as soon as he heard it was about Chili’s because nothing good is ever going to come out of a trip to Chili’s.

As for Gregory, I’m afraid his life as a server is over because whenever he applies for a new job, as soon as someone Googles his ass, the first thing they are going to see is a long list of news stories about that time he spit into a to-go cup. My advice to him is to change his name on his resume and start a whole new life. Or get the fuck out of the restaurant service because servers like him are the ones who give the rest of a bad name. Spitting into a drink without stirring it up? C’mon, Gregory!