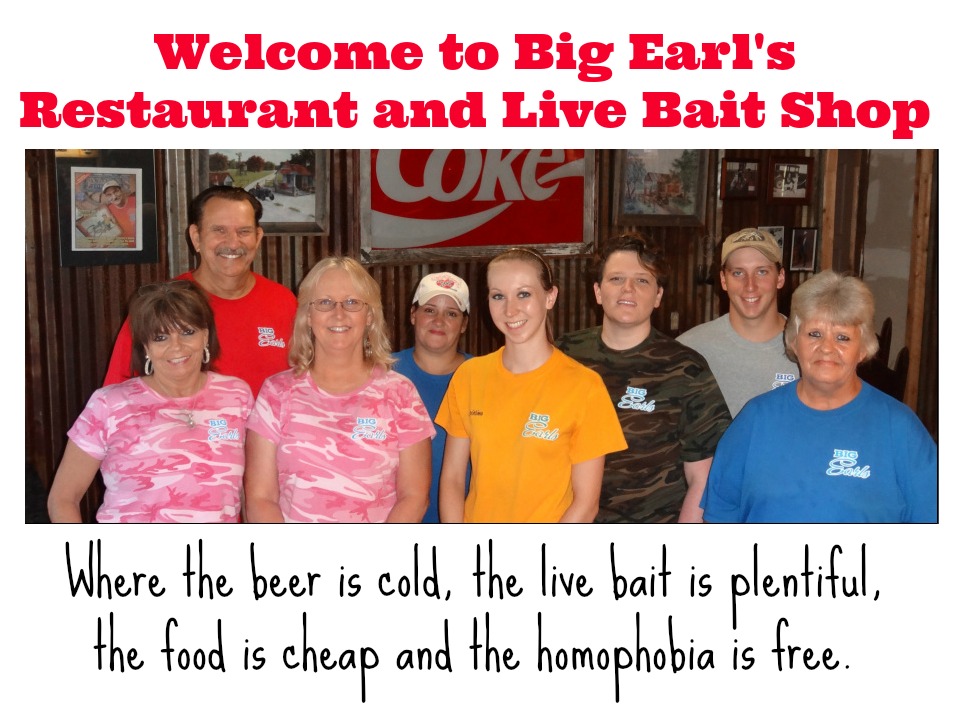 Oh, boy, look what I found: hatred against gay people in a restaurant. A restaurant/live bait shop called Big Earl’s (Of course it’s called Big Earl’s…) in a sad little town called Pittsburg, Texas is making news because a waitress told two gay men, Collin Dewberry (best name ever) and his partner Kelly Williams that they were not welcome to come back because they “don’t serve fags.” They were told this after they had eaten and paid their bill because even a dumbass business owner like Big Earl Cheney knows that dollars spend the same way whether they come from gay people or straight people, so you may as well get those dollars before you call your customers a couple of fags. He says that he doesn’t have a problem with them being gay, he just didn’t think their behavior was appropriate in a family restaurant. I’ll tell you what I think is inappropriate in a family restaurant: selling live fucking bait, that’s what. Who the fuck goes to a live bait shop to get their tackle and fishing supplies and then decides it looks like a nice place to get a burger? Hillbilly motherfuckers like Big Earl, that’s who. The way Big Earl talks, you would think the two guys were bare-boning at Booth 5 using I Can’t Believe It’s Not Butter for lube and an old stale donut for a cock ring, but actually, all that he saw was their legs touching. The horror! His daughter was the waitress who was serving them and she is the one who told the guys they didn’t like fags in their restaurant. In fact, their company manifesto is posted right on the door. It reads:

Welcome to Big Earl’s Where MEN act like MEN and LADIES act like LADIES. NO SAGGY PANTS. We reserve the right to refuse service to anyone.

KLTV.com-Tyler, Longview, Jacksonville, Texas | ETX News
When KLTV reporter Summer Dashe (here is her Twitter profile. Tell her I said hello and thank you.) asked him what that sign meant, he said, “The same thing it says. That a man’s supposed to stand up and be a leader. He’s not supposed to be a woman. He’s not supposed to come in here in a dress.” Ummm, I don’t think Collin or Kelly were wearing dresses, Big Earl and if we’re going to judge people on what thy wear, can we talk about your stretched out grey t-shirt that you bought in a pack of three from the Wal-Mart odds and ends bin? And don’t even get me started on that Colonel Mustard mustache you’re rocking. It looks like it’s six days away from mutton chops. And if you want men to stand up and be leaders, why don’t you take your own advice and stand up and lead your daughter to a cliff so you can both jump off? Big Earl and his daughter, Lil’ Earlietta have got something against gay men and saggy pants but Earl is allowed to have saggy jowls and his daughter is allowed to be anything but a lady. Yeah, that makes sense.

Collin and Kelly have lived in East Texas their whole lives and they say they have never had that kind of hatred directed at them. Having grown up in Texas and also spending my fair share of time in East Texas, I have to say that I am amazed this is the first time it’s ever happened to them. When I was teenager, my nickname in high school was pretty much “Fag.” It was a good day if it went by without someone yelling that to me in the hallway or in the cafeteria. I regularly saw my name written on the bathroom walls calling me “fag.” One time on the school bus some douche bag stood up and announced that he had invented Fag Proof Glasses. With much fanfare, he pulled out a pair of Rayban sunglasses, placed them on his face and yelled out to the entire school bus that he could no longer see me or my best friend Michael. “Hey look y’all, all the fags disappeared!” Charming, right? Gotta love Texas in the 80’s.

I went to look at Big Earl’s Facebook page and not surprisingly, most people are disgusted by the story. What is surprising though is that every time I look at the page, the number of people who “like” Big Earl’s grows just a little bit. That means that there are plenty of people who stand behind Big Earl. Personally, I would never stand behind Big Earl because he looks like the type that could let a fart fly out at any given moment and I like my hair way too much to see it burned off by the fumes of a homophobic asshole’s asshole. The restaurant is still proud of their stance, claiming, “The amount of support we have had has been greatly appreciated. The numerous phone calls received tonight from people that feel the same way we do has been outstanding. We have new customers due to the news story, and will continue to feel the same way.” They are happy with all the new business that is flooding their restaurant/live bait shop and I can only assume that the customers who are showing their support are equally idiotic and back-ass-ward. I have held on to this post for a few days because Big Earl took down his Facebook page after it was bombarded with comments from smart people who know that love makes the world go ‘round. I wanted to wait until their page was back up again so we could all contribute our thoughts to the story, but in the meantime, here is their website. Go check it out. You can also see their Yelp page which is full of great reviews. If and when their Facebook page is up again, you can count on me to let you know.

25 thoughts on “Texas Restaurant Serves Up a Side of Homophobia”