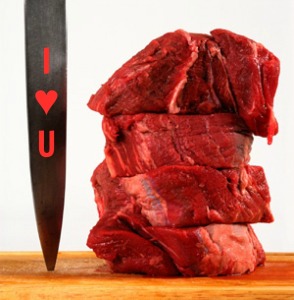 Okay, this post did not do well the first time it went up so it can hardly be considered a “Best of Bitchy Waiter.” However, I really liked it and thought it was worth putting up again. And since it’s Saturday and I am on vacation, I plan on having a big juicy steak tonight.

As I lead the two customers to Booth 9, I surmise that the booth may be too small to accommodate their rather large frames. They look at it and ask to sit at a table. I am embarrassed for not thinking of this sooner, but I am so accustomed to people clamoring for a booth that it is habit to lead them to an empty one. The woman seems to have already been drinking but it does not stop them from ordering a bottle of red wine. After the wine is poured, I take their order.

“I want a New York shell steak, black and blue,” says the man. “Tell the cook to just sear it on each side and out it on the plate. I don’t mind if it’s still mooing when it gets here.”

The woman smiles at me, revealing purple teeth proving that she has in fact already had plenty of wine earlier, if not moments before, then continuously for several years.

“I’ll have a blue cheese burger medium-rare with no bun and no fries, but with a salad instead,” she slurs.

I step over to the computer to ring in their order and watch as they reach across the table and fondle each other’s hands. At first, it seems rather sweet but after a few minutes it looks more like molestation than affection. Their hands are twisted together in some kind of thumb-battle rape situation and she is staring into his eyes with the intensity of the Death Star. They suck down the wine, never breaking their stare.

When I place their food before them, I fear that the steak is going to be over-cooked, for Juan tends to think that people don’t really want their meat rare. The man cuts into the steak and I watch blood and juice spill out onto the plate and swirl around in a pool of not-well-doneness.

“Well, this more medium-rare, but I guess it will do,” he says.

I offer to have the steak recooked, but he insists it is fine. Meanwhile, his lady lover has her bleary eyes set on her burger. I leave them to their meal and step aside to observe how much more she can drink before dissolving onto a puddle of drunk. I can tell that the man is not happy with his steak and I feel bad that it came out wrong. On the other hand, I’m just the server and all I can do is tell the kitchen how to make it and hope they comprendé. If he doesn’t want me to get him another one, I have done all I can do.

By this point, the lady seems trashed. Her face is flushed and she very often stops eating to rest her chin on her hands. She manages to eat all of the burger but I notice that the man has eaten only half of the steak. Then, I watch as he takes the steak and slides it onto her plate. It drips with blood and he tells her to eat it. She does.

She picks up his steak knife and cuts off a huge portion of meat and slowly and seductively puts in into her mouth, never taking her eyes off of his. She crams the big piece of meat into her pouty little mouth and begins to chew. And chew. And chew. I alert one of my co-workers to the show. We are watching some kind of ritualistic red-meat foreplay and the man seems to be quite enjoying it. She begins to swallow with great difficulty, tilting her head downward and moving her closed fist to her mouth with her eyes closed.

“Is she choking?” my friend asks.

“I hope not, because I don’t know the Heimlich, do you?”

“Well, there’s a poster about it in the side stand-wait, she’s okay!”

She swallows hard and then looks up at her Man Meat and smiles to show not just purple teeth but a need for a case of dental floss.

“Soooo good. I want more,” she says and she cuts off an even bigger piece of beef and stuffs it into her face.

“Is this for real?” asks my co-worker.

We watch as she struggles to get the piece of meat down, ignoring any gag reflex she may have once had. She again closes her eyes and looks downward, covering her mouth once more with her hand that is now covered with meat juice. Once the meat is down her food pipe, she takes the final swig of wine in her glass. She tugs at her sweater to achieve a sexy off-the-shoulder look and then pulls her bra strap down exposing a bare shoulder with an angry red mark from where her bra strap had been. After a few minutes of no more ingesting, I go to the table and ask if they are finished.

They are. I remove their plates and offer dessert, but I have a feeling that dessert will be had later this evening and it won’t involve anything on our menu. They ask for the check and I give it to them, minus the steak because I know it was not to his liking although I think he quite enjoyed it in other ways. He is very generous with his tip (that’s what she said) and I am happy that it has all worked out.

He gets up and goes around the table to help his Meat Eater to her feet. She leans on him and the two of them stumble out of the restaurant on their way home to some corpulent copulation.

I imagine that when they get home he says something like, ‘Show me again how you took all that meat.”

And she’s all, “Oh yeah, baby, why don’t you feed me that tube steak?”

And he says,” Do you think you can take it all?”

And he’s all, “Oh, yeah, baby, lemme smother it with some A-1 sauce and then I’ll throw some cracked pepper corns on it with some heavy cream.”

And he does and when he climaxes it’s worcestershire sauce and when she climaxes she shoots out a loaded baked potato.

It is some sloppy drunk red meat sex.


Now read one of these lame-ass posts: