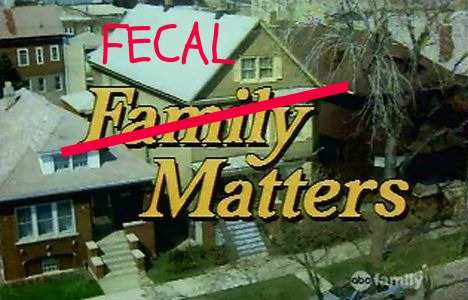 Today we have another post from a random server who did not even tell me their name, but they had me at the title. Anyone who feels confident writing a story about poop, gets an A+ in my book. It’s a little short but really, how many words does one need when discussing poop? We have all had our experiences with poopy diners but this story seems especially odorous.  -BW

I’m a fresh face to the food service industry. Needless to say, the inner workings of a restaurant and the customer interactions have caught me off guard. Being a newbie, I often wonder in amazement, “does this happen at other restaurants?” I encountered a customer last week who finally broke me into my bitchy waiter mentality.

Our restaurant is a small, locally owned establishment in rural Illinois. Its not amongst the highest rankings of fine dining establishments. However, we are probably the nicest joint around in Nowhere, Illinois. So, amidst the classical music gently humming in the background and the bow-tie sporting servers, a man comes hustling in during our lunch hour. He zips past the host station and into our restroom. A busser (sorry, “host assistant”) makes the comment,”dude, something smells like straight up shit.” At the time, everyone was too busy to take too much notice but one by one we all hopped on the shitty band wagon of nose pinching delight.

Several minutes later, the smelly man comes out of the restroom and casually heads over to join his party. Now the stench has flooded our restroom area, located directly next to our server station. Another customer emerges from the badlands and promptly announces to us that she thought “a child may have had an accident” in our restroom.

The walls, toilet and floor were covered in poop as if a shit bomb terrorist was on the loose. It doesn’t end there- we began to notice that there was fecal matter on the dining room floor. A trail leading straight to the culprit. In fact, the culprit himself was also covered in his own feces. It was on his back. To make matters worse, he notices another party who he knows personally, moves to their table and plops down in another chair. Now our bathroom, two chairs and our dining room floor are all tainted. Literally- HOLY SHIT!? The man never acknowledged his butthole vandalism, nor did his party or the other tables near by. Everyone just continued digging into their sundaes and chocolate crepes. His party even told our host that they were all considering returning that evening for desserts.

As I mentioned previously, I haven’t been serving very long. Theoretically, I can’t make the assumption that this incident is unique. Perhaps customers come along to other restaurants and shamelessly smear poop everywhere. Before you ponder the question, only because it seems to generally be everyone’s first question; no, the man was not a senior citizen and nothing about him suggested any mental condition (well, that’s up for debate). So tell me, have you ever had a shitty day serving tables?