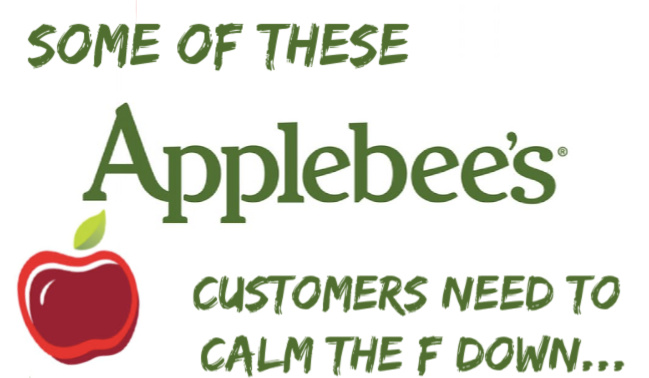 The world is a glorified shit show right now with the entire global population struggling to protect themselves from Covid-19 and figure out how they’re going to pay their bills since basically everyone is unemployed right now. Be that as it may, there are still customers out there who are going to the Applebee’s Facebook page and complaining about their experiences and then complaining some more when they don’t hear back right away. Since the Applebee’s corporation is no doubt up to their ears in spinach and artichoke dip and a myriad of other issues, I thought I’d do them a favor and respond to some of their customer complaints on their behalf. You’re welcome, Applebee’s.

First we have Ann: 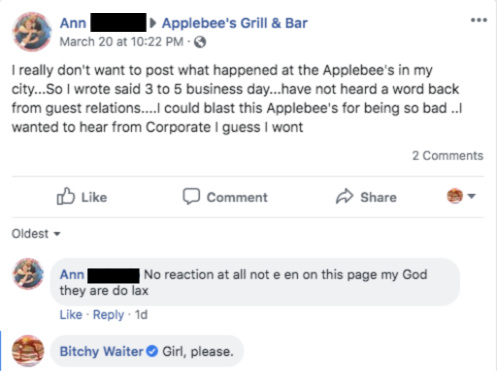 Ann, I’d like to remind you that there is a global pandemic happening right now. I’m sure that whatever occurred at your local Applebee’s was tragic for you, but there are bigger fish to fry right now and I’m not talking about their double crunch shrimp or blackened tilapia. That you haven’t heard back from Applebee’s yet about your overcooked burger or a overcharge on your credit card is not surprising since Applebee’s is trying to figure out how to take care of their employees and keep their business afloat in this unprecedented time. Maybe they just haven’t had a chance to reply to your email yet because they have been going through thousands and thousand of enquiries from people asking how to file for unemployment insurance. Perhaps you can just climb off of your high horse for a couple of weeks and realize that the world does not revolve around you. Calm down, Ann. Give Applebee’s a chance to prioritize their emails and I’m sure yours will eventually float to the top like a wet turd in a dirty toilet.

Now allow me to move on to Jen:

Jen is very upset that the 25¢ buffalo wing promotion is not valid for takeout and delivery. Jen. Girl. That promotion is clearly to get customers into the restaurant so they can order beers and cocktails and other food. It’s not so that you can drive up and buy 100 wings for $25 and then feed your quarantined family for five days. Maybe the TV commercial didn’t specifically mention that, but it’s probably because they assume people have half a brain in their skull. And maybe they haven’t had a chance to reshoot the TV commercial to make it more clear because they’ve been busy dealing with laying off thousands and thousands of employees. Jen, rather then using your precious time to complain about the lack of cheap 25¢ food, why not use the time to wash your hands and stock up on pasta, dried beans and toilet paper. News flash: there’s a global health emergency and no one cares about your need for buffalo wings.

This concludes my customer service interactions on behalf of Applebee’s. In this crazy time, we all need to figure out what we can do to help one another and I figure I can help Applebee’s by explaining to some of their customers that their problems just aren’t as big as they think they are. 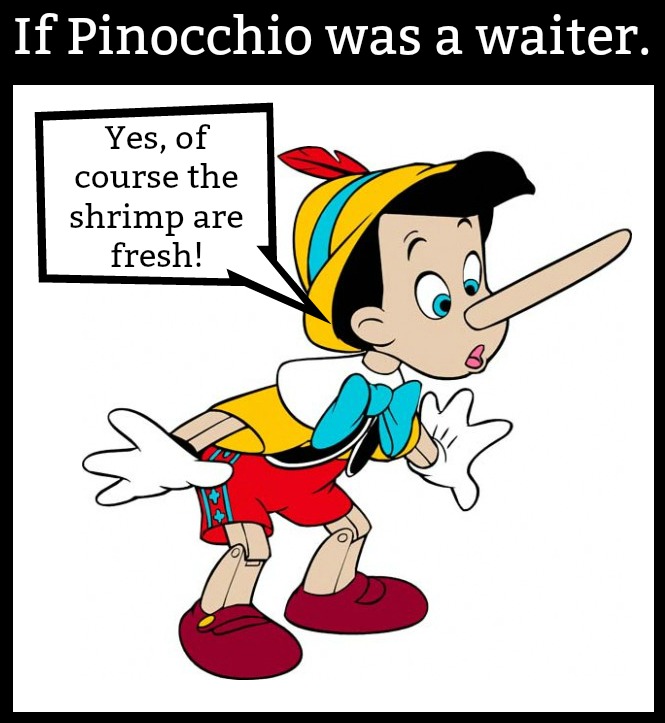