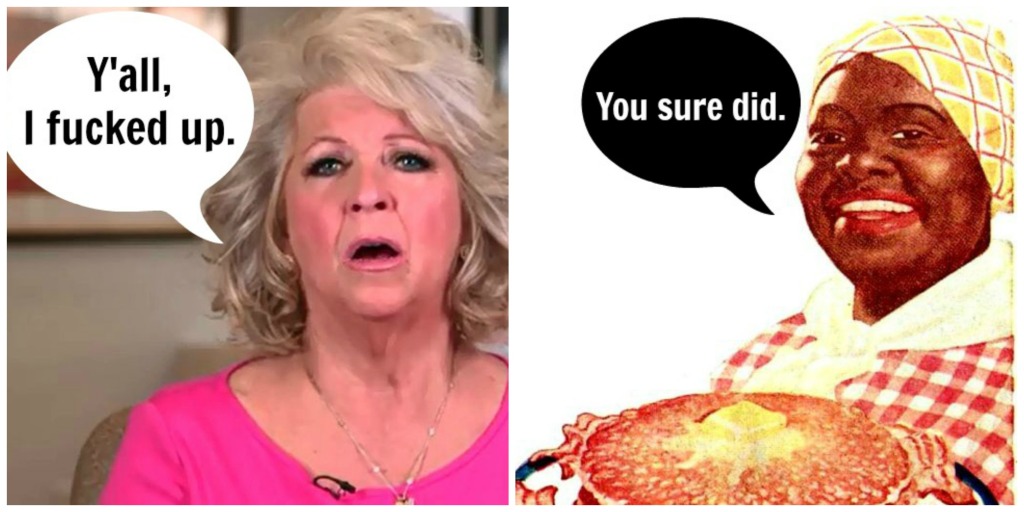 Oh, Paula, you hurt me. You hurt me real bad. Deep down in the bottom of my soul, there is a dried up butter packet that used to be my love for you. It’s one of those little plastic cup kinds that you peel the foil off the top. You know, the kind you get at IHOP? When I heard about your scandal, my heart fell. Thankfully, my heart was wrapped in a blanket of fat because I have too many of your cookbooks, so my heart didn’t break or anything; it just hit the floor and then bounced back up and landed in a cereal bowl. No, it didn’t break, it just hurt a little.

I don’t know what to think, Paula. I always loved your crazy stick of butter ass, but now I hear that you made some comments that most people would perceive as pretty fucking racist. And then Food Network fired you. And now I just picture you sitting in your I Can’t Believe It’s Not Butter Hot Tub and crying. You know you made a mistake. It’s never a good idea to use the n-word, Paula. I agree, it’s a horrible word, but then again lots of people say it who don’t lose their job. And just typing “the n-word” seems weird because everyone knows what word is being referred to when you say “the n-word” but it’s okay to say “the n-word” but not the actual n-word.

Yeah, Paula, you fucked up. Then again, you were just being honest when you were asked if you’ve ever said it. Maybe if you’d been a little bit more honest about that whole “having diabetes thing,” people would be more willing to forgive you for this one, but it it seems like you’re kinda more done than a turkey at 8:00PM on Thanksgiving night. I don’t know what’s going to happen with you, Paula Deen. This country loves to forgive celebrities after they fall from grace, but I have a feeling we won’t be seeing much of you for a while. I too need some time to sort out my feelings about this whole mess.

In the meantime, I want to remember brighter days with you, back when I imagined you smelled like vanilla and Crisco. I want to remember that time that you were with Liza Minnelli and you watched her sing to a chicken. Good night, sweet Paula. Rest your weary head on your pillow of butter and hope for forgiveness. I mean, seriously, if even I am questioning your actions, how far have you fallen?