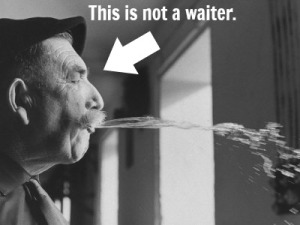 Myth: waiters spit in food all the time.

The recent article I wrote for CNN’s Eatocracy, 5 Reasons You Shouldn’t Blame the Waiter, generated hundreds of responses with a sharp divide between the “get a real job” comments from most customers to the “everyone should wait tables for six months of their life” comments from most waiters. The comments were all pretty mundane but one person by the name of Thomas had this to say:

I have a harder time respecting wait staff when on these forums there is always a post about spitting in food. If servers want to be treated as professionals, you might want to stop posting about messing with people’s food. It makes it sound like the profession is staffed by immature children.

I hate to admit it, but I think Thomas is right. Can’t we all agree that spitting in the food of a customer is a veiled thereat that most of us would never even consider doing? It’s sort of a restaurant myth that it happens all the time. I’m not going to pretend that it never happens because, let’s face it, sometimes customers can drive us to the very edge of our sanity and we struggle to retain some kind of control over the situation. Howeber, I would venture that most people who have waited tables have never actually spit into someone’s food.

Full disclosure: I did it one time and I felt really bad about it. It was over twenty years ago and the man called me a faggot and I spit in his lemonade. Yes, it was immature of me, proving Thomas’ point that the profession is sometimes staffed by immature children. I was barely 22 years old when I did it. You can read that tired story here.

The point is, I have been serving for twenty years since then and have never even considered doing it again. So why do servers always threaten it? Maybe it’s the same reason that parents tell their kids things like, “If you don’t behave, you’re not going to be allowed to use the computer for a week.” The parents don’t mean that most of the time, it’s just something they say so the kid will pick themselves up from the puddle of disaster they have melted into. It’s a veiled threat. The movie Waiting had a mantra in it: “Don’t fuck with people that handle your food.”

We all like to pretend that we would do these horrible things, but the truth is most of us are too humane to follow through on the threat. Aren’t we? Well, aren’t we? Let’s forget that a man called me a faggot twenty years ago and I felt alright spitting in his lemonade, because he totally crossed the line and was asking for such behavior. For the most part, when a customer really pisses us off, all we do is go into the kitchen and call the lady a bitch or the man an asshole and then maybe we don’t fill their water glass anymore. Some of us take out our frustration by writing a blog for five years. Servers aren’t scrambling around hocking up loogies to deposit into soups and gravies and I have never seen someone intentionally put hair into food. I have seen a server pull a hair from a plate of food as he was walking to the table and then serve the food anyway, but that’s a big difference, right? It’s not like I put the hair there on purpose or anything. I was just saving the customer from discovering it and therefore doing the customer a huge favor.

Servers spitting in food all the time is a myth just like so many other myths of the restaurant industry, like that man telling you he’s going to take really good care of you and that he’s a big tipper and then leaves 10% or the woman who says that her children are very well-behaved and then ten minutes later you’re peeling them off the walls. Just because people say something does not mean it’s true. The next time you hear a server saying that he will spit in the food if someone is rude to him, just know that it’s something he’s saying to try to gain some power. It’s a threat and very unlikely to happen, right? I am right, aren’t I?

Just don’t call me a faggot and then order a lemonade.

30 thoughts on “The Myth of Spitting in Food”